Greater potential for Australian after best lap was not perfect. 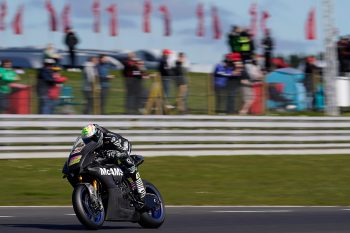 McAMS Yamaha’s Jason O’Halloran started 2022 fastest at the Snetterton British Superbike official test, despite making ‘quite a big mistake’ on his quickest lap.

O’Halloran set the pace on two of the three days, with his fastest time of 1m46.571s beating the existing lap record by 0.572s and a providing slim buffer of 0.072s over returning Tom Sykes.

“First test of the year done and it’s been a really good few days for us, the weather has been perfect so we’ve had loads of track time,” O’Halloran explained. “I’ve tried so many different versions of the bike here, at least one maybe two per session which is perfect for information and data.

“To go fast at the end is good, I made quite a big mistake on the fast lap too, but more importantly testing is to gain information and feeling and I am very happy with what we have achieved. The whole team have done a great job and I’m looking forward to the next test.”

Official BSB testing resumes later this week at Donington on 31 March, as riders and teams continue to prepare ahead of the season opener at Silverstone in less than three weeks.