Frustrating 14th for Miller unable to overtake in Argentina

Australian charger aware of improvement areas ahead of COTA. 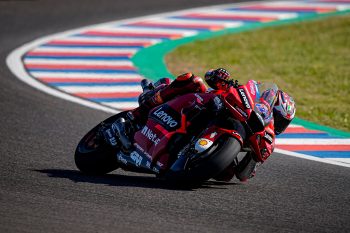 It was a frustrating Grand Prix of Argentina for Ducati Lenovo’s Jack Miller, the Australian not having the right feeling in the Desmosedici GP22 to move forwards and attack from 14th.

Miller set the 11th fastest time during Q2 however was demoted three places as he was deemed to have impeded Fabio Quartararo during the session.

From there the 27-year-old ultimately crossed the line at the completion of Sunday’s 25 lap race in P14, with a direction on how to improve ahead of round four this weekend at Circuit Of The Americas (COTA).

“It was definitely a frustrating race because I couldn’t make a single overtake, but unfortunately, I didn’t have the right feeling to attack today,” Miller explained.

“It was an unusual weekend, this morning, we made a change that took us in the wrong direction, and I struggled a lot in the race. We know what we need to work on to improve, so now we’ll try to learn from this and come back stronger for the next race in America.”

It’s been a challenging start to 2022 for Miller, a technical fault ruling him out of Qatar’s opener before scoring a solid fourth in a wet Indonesian Grand Prix.

Despite scoring just two points at Termas de Rio Hondo, Miller sits 30 points back from championship leader Aleix Esparagaro and ahead of teammate Francesco Bagnaia in the standings.