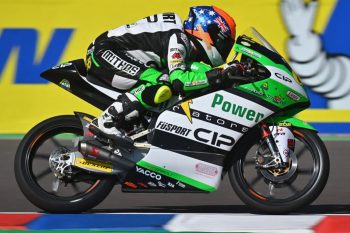 A strong weekend from CIP Green Power’s Joel Kelso saw the Moto3 World Championship rookie land a top 10 race result in Argentina, after showcasing his potential by qualifying P5 in his first time at the Termas de Rio Hondo circuit.

Kelso overcame the struggles experienced in practice to transfer through Q1 and achieve his best qualifying result of the season in the second qualifying session.

The 18-year-old ultimately finished the race just 3.3 seconds from winner Sergio Garcia as he crossed the line in tenth, and with that a further six points to add to his 2022 account after scoring at round one in Qatar.

“This weekend was not so easy for us, we struggled in FP1 and FP2,” Kelso explained. “We managed to find a way to make a good qualifying, which was really positive to be starting from fifth position for the race.

“Honestly, we had higher hopes. We thought we could do better in the race today, but that is racing in Moto3. We’ll keep working for the next one. Thanks to all the team and to all the sponsors for the support.”

Kelso has progressed at each of the first three rounds, all venues which he had not ridden prior. He was 15th in Qatar, on track to finish 13th at Indonesia before a late-race fall and most recently shown a top 10 finish is well within his capabilities at Termas.

The next chance for Kelso to continue his progression comes this weekend at Circuit of the Americas (COTA), the fourth round of the 2022 MotoGP World Championship.