Termas not the turning point Gardner was hoping for 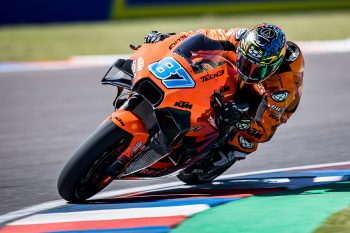 Tech3 KTM Factory Racing’s Remy Gardner has admitted that his performance finishing P17 at Termas de Rio Hondo was not the turning point he was hoping for, the Australian continuing to progress on the RC16 three rounds into his first MotoGP campaign.

Shipping delays shortened the amount of track time in Argentina to the extent that Friday’s program was cancelled altogether, putting MotoGP rookies such as Gardner under pressure to learn the track on premier class machinery as quickly as possible.

Gardner qualified in P22, 1.5s from pole-sitter Aleix Espargaro before delivering a strong opening half of the race to move his way forwards to as high as 16th, ahead of teammate Raul Fernandez until lap nine.

The number 87 ultimately crossed the line 28.7s from victory and was left with a somewhat bitter pill to swallow after achieving strong finishes at Termas in the past, most recently finishing second in Moto2 when the championship last visited in 2019.

“I enjoyed the first part of the race, I stayed close to the group and had some nice battles with a couple of riders,” Gardner explained. “I struggled more during the second half, unfortunately.

“I am feeling my progress but everyone is improving too, so I have to stay positive and continue to work for myself and learn the bike. I take each race one by one and don’t look too far.

“I like Termas de Rio Hondo a lot – I have always had good results here – so I thought today might have been the turning point for me but it was not unfortunately so it is a bit tough to accept. I stay positive, and results will come.”