Direct updates from third round of the ASBK season.

Follow the 2022 Mi-Bike Australian Superbike Championship (ASBK) with direct updates from round three of the season at Wakefield Park through Racefeed. 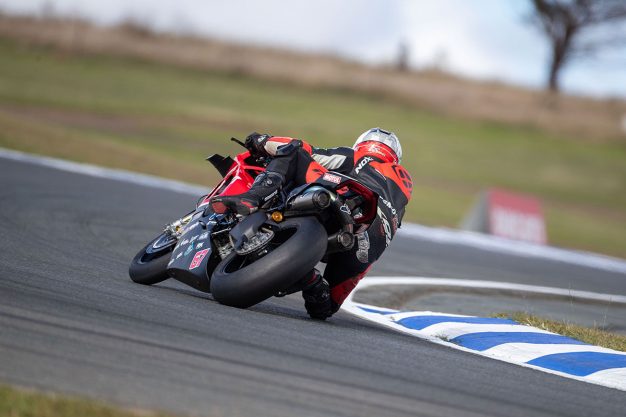 Supersport race one:
The first Supersport race of the weekend was a three-rider race at the front and it was John Lytras (Yamaha) who took P1 following the 15-lap restart. When they initially got underway, Tom Drane (Yamaha) crashed in the turn one/two and prompted a red flag, but once things got back underway Tom Bramich (Yamaha) and Noel Mahon (Yamaha) also soon went down in separate incidents, as did Scott Nicholson (Yamaha) on the second lap. Lytras effectively controlled part two and won ahead of pole-setter Sean Condon (Yamaha), who made a last corner move on Ty Lynch (Yamaha), with the top five completed by Mitch Kuhne (Yamaha) and Jake Farnsworth (Yamaha). Positions six through 10 featured Rhys Belling (Yamaha), Timothy Large (Yamaha), Declan Carberry (Suzuki), John Quinn (Yamaha) and Nicholson, who managed to remount for points as the final finisher in the race altogether.

Superbike race one:
Points-leader Mike Jones proved once and for all that his double in Queensland was no fluke, striking from pole position once again in the opening 20-lap affair this morning to edge defending champion Wayne Maxwell (Boost Mobile Racing with K-Tech McMartin Racing Ducati). Maxwell led initially with Jones in tow, until the latter made his move with two laps to go and powered away to win by a full second as the chequered flag flew. It was another ominous effort from the former two-time champion to lead home current number one Maxwell, with second of the factory R1Ms Cru Halliday (Yamaha Racing Team) there in a comfortable third. P4 was a sign of improvement from Troy Herfoss (Penrite Honda Racing), in turn ahead of Bryan Staring (DesmoSport Ducati) and Arthur Sissis (Unitech Racing Yamaha) right behind him. Maxima BMW duo Glenn Allerton and Josh Waters were next in line, with private Yamaha riders Daniel Falzon and Anthony West completing the top 10. 727 Moto rookie Broc Pearson was ruled out after a crash in warm-up, however, after sitting out Saturday, Max Stauffer (Yamaha) returned for race-day and brought it home in 14th position to earn a share of points.

Supersport race two:
After winning round two on the Monday afterwards, this time around Lytras was able to enjoy the middle step of the podium with a commanding clean-sweep of the round in Goulburn. Lytras once again controlled things from the front of the pack and went on the finish 0.520s ahead of the determined Lynch, who managed to build a buffer over Condon as he worked his way into third position by the conclusion of 16 laps. Fourth was a solid way to rebound from Nicholson after crashing earlier, as did Bramich to fill the top five. Belling brought his R6 home sixth once again, ahead of Drane, Farnsworth, Large and Carberry. The round podium was Lytras over Condon courtesy of his point for pole, with Lynch P3. In the point-standings, it’s now Lytras at the head of the pack by 17 points from Lynch, with Nicholson a further 18 back in third. The category will next be on-track at Morgan Park in August.

Superbike race two:
The anticipated second bout between Jones and Maxwell saw the former jump out front early as Maxwell was caught up in the pack, but he soon made his way into second by the end of lap one and set his sights on the front. It was Jones who managed to first half of the race until Maxwell made his move at the final turn on lap 13 of the 20, which is where he would remain – going on to win by 0.298s. Jones tried to mount an attack on the closing lap, but with the points-lead to consider and the fact that he would win the overall regardless, P2 was enough for him to take the overall after claiming a point for pole position on Saturday. Third in the race was Halliday after running as high as second initially and then being bumped back to fourth by both Maxwell and Staring, holding the fast-finishing Herfoss at bay for position. Staring eventually crossed the line in fifth, marginally in front of Sissis and Waters, while Allerton, West and Lachlan Epis (BMW Alliance Racing) were the top 10. Overall, Jones edged Maxwell courtesy of his pole position point, with Halliday returning to the podium, while in the standings it’s Jones now 23 points ahead of Maxwell, with opening round winner Staring another seven points in arrears. Next stop for the ASBK’s premier class will be Hidden Valley Raceway in Darwin alongside the Supercars between 17-19 June.