Wakefield Park double for Lytras to take control in Supersport

Dunker perfect to win all three races in Supersport 300 field. 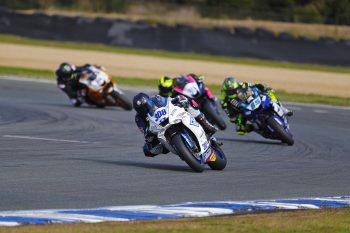 New Australian Supersport Championship leader John Lytras did the double at Wakefield Park on Sunday, the Yamaha rider taking control of the series by going 1-1 at round three of the 2022 season as Cameron Dunker swept Supersport 300.

The first Supersport race of the weekend was a three-rider race at the front and it was Lytras who took P1 following the 15-lap restart.

When they initially got underway, Tom Drane (Yamaha) crashed in the turn one/two and prompted a red flag, but once things got back underway Tom Bramich (Yamaha) and Noel Mahon (Yamaha) also soon went down in separate incidents, as did Scott Nicholson (Yamaha) on the second lap.

Lytras effectively controlled part two and won ahead of pole-setter Sean Condon (Yamaha), who made a last corner move on Ty Lynch (Yamaha), with the top five completed by Mitch Kuhne (Yamaha) and Jake Farnsworth (Yamaha).

After winning round two on the Monday afterwards, this time around Lytras was able to enjoy the middle step of the podium with a commanding clean-sweep of the round in Goulburn.

Lytras once again controlled things from the front of the pack and went on the finish 0.520s ahead of the determined Lynch, who managed to build a buffer over Condon as he worked his way into third position by the conclusion of 16 laps.

Fourth was a solid way to rebound from Nicholson after crashing earlier, as did Bramich to fill the top five. Belling brought his R6 home sixth once again, ahead of Drane, Farnsworth, Large and Carberry.

The round podium was Lytras over Condon courtesy of his point for pole, with Lynch P3. In the point-standings, it’s now Lytras at the head of the pack by 17 points from Lynch, with Nicholson a further 18 back in third. 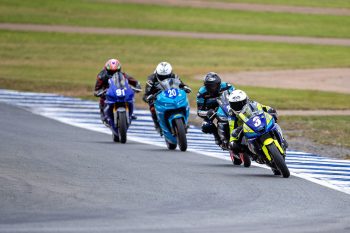 All three races in Supersport 300 were won by pole position-holder Dunker (Yamaha), joined on the overall podium by Taiyo Aksu (Yamaha) and Glenn Nelson (Yamaha). Dunker has a 25-point advantage in the series over James Jacobs (Kawasaki) and Glenn Nelson.

The R3 Cup round belonged to Dunker with 1-2-2 results ahead of race two winner Glenn Nelson – the series leader – and final race victor Liam Waters, while in the Oceania Junior Cup, Hudson Thompson went 2-3-1 to win the round on countback over opening race winner Harrison Watts, current points-leader, and Levi Russo, who topped the second race of the round.

While the Superbike class will travel to the Northern Territory in June, the other remaining ASBK categories will next be on-track at Morgan Park in Queensland between 5-7 August. 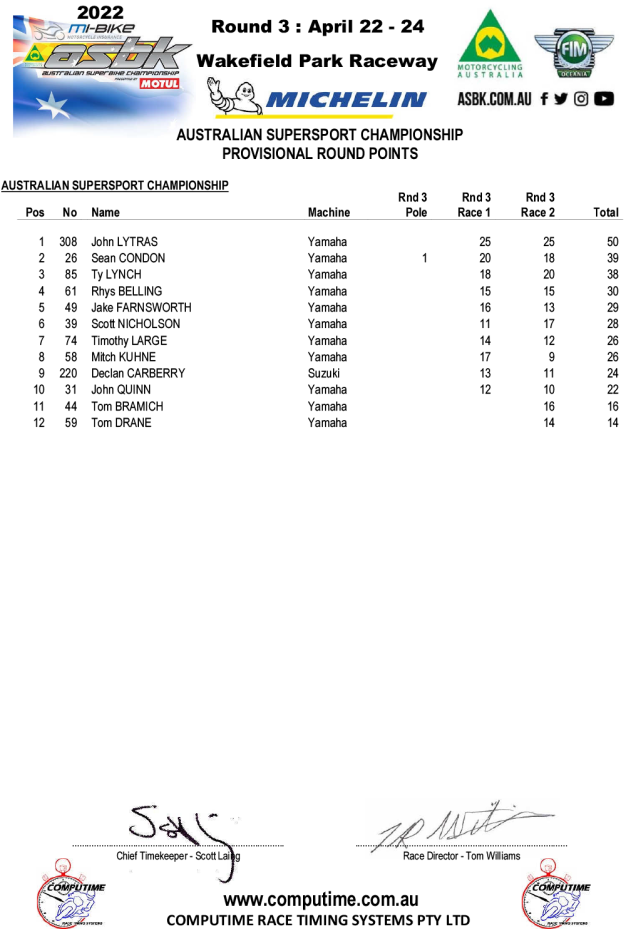 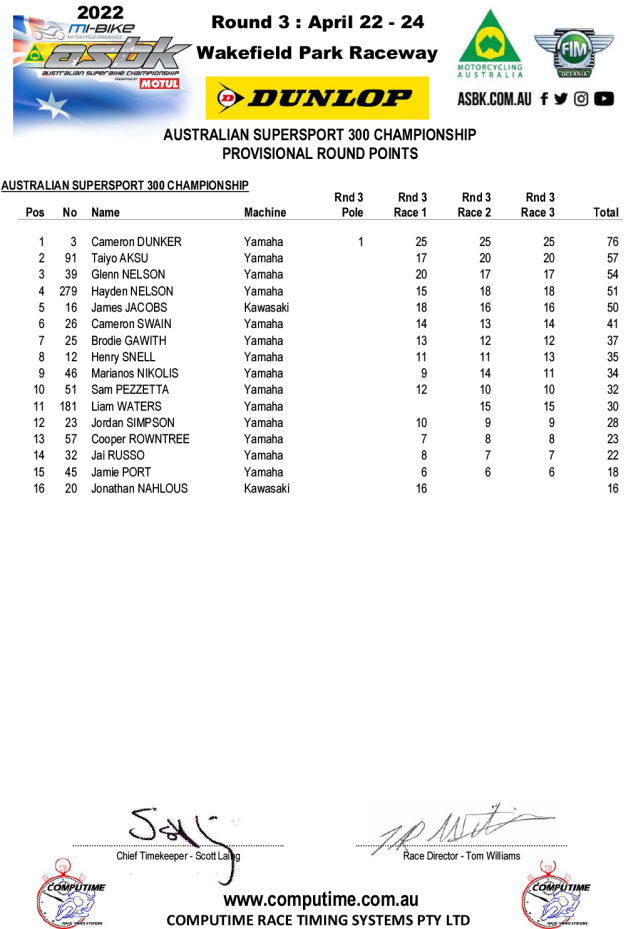 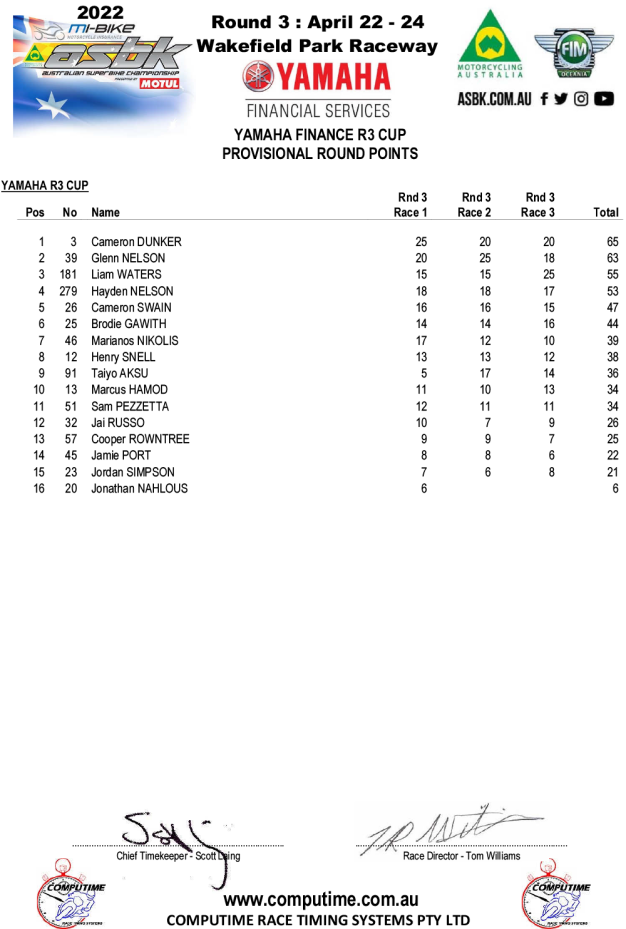 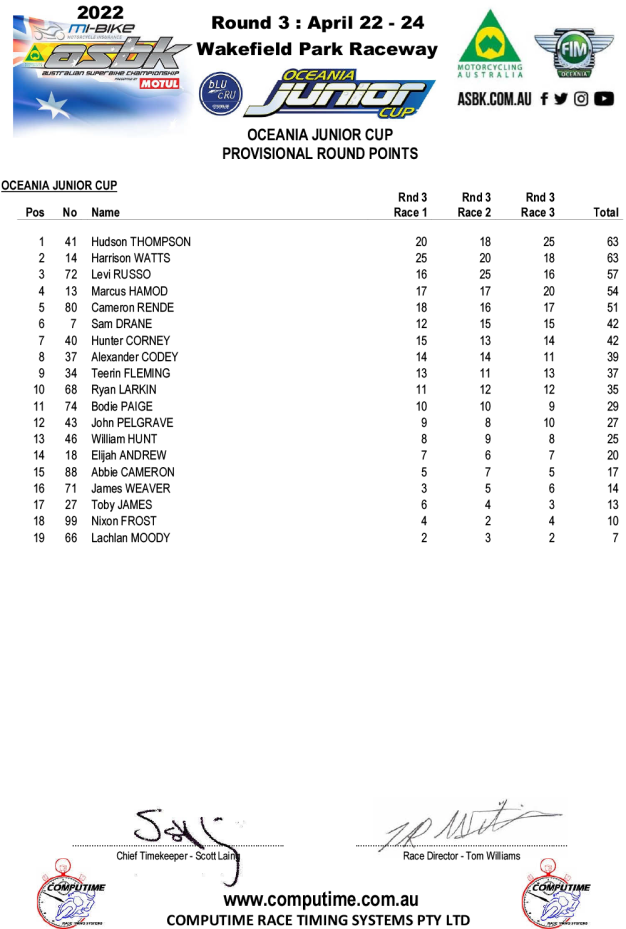