Mike Jones secured the overall victory in round three of the 2022 Mi-Bike Australian Superbike Championship at Wakefield Park, extending his points lead and making it two from three round wins since joining Yamaha Racing Team (YRT) in the premier class this season. CycleOnline caught up with the Queenslander after the races for this Debrief interview. 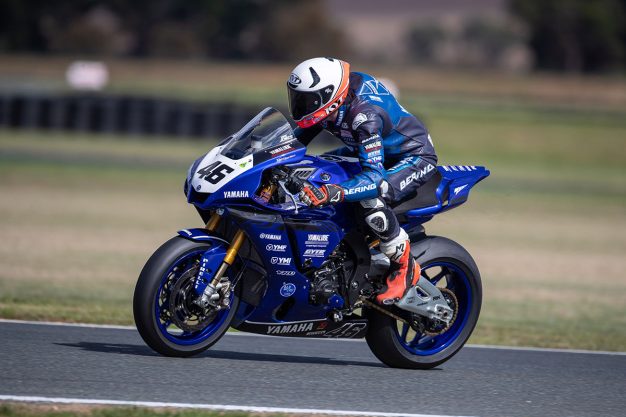 Two overall wins in a row, and winning two out of three rounds this season with Yamaha Racing Team (YRT). How does that feel to you in your first year with the team in the premier class?

It’s a fantastic feeling. I’m so happy, I don’t have any more words, I’m just so happy. Obviously, being able to get these results on the Yamaha R1, and with the team, it’s just… having success always makes you feel good. It just felt very good, and overall very happy.

Taking it back to Friday, Wayne came out of the gate really strong and then you turned the tables on Saturday and then Sunday race one. Was there any key to that turnaround that you can detail?

The reason why Friday we weren’t as strong as Wayne, was just simply that the testing that we had leading up was hampered by the weather once again. Realistically, Wayne came in better prepared than anybody else, seeing as he has had two years within his team leading into the weekend. For us, it was more just utilising the Friday practice sessions to learn as much as we could, in such a short amount of time, so when we got to the end of that day and had a good debrief and discussed everything that we worked through, we were able to come up with a really good package for Saturday. I was also able to work on my riding skills and find a way to extract the most out of the bike on Saturday. It was really just a combination of a few adjustments to the bike, and also my riding.

You mentioned the weather impacting testing in the lead up to round three. I remember even prior to round one at Phillip Island, a lot of your quality testing time was impacted by rain. You’ve already explained how it feels to win two from three overalls this season, but is it something you imagined three rounds in? Particularly after the testing and build up you had to round one, you are sitting here with this points advantage six races in. Would you picture yourself here, when you look back to your approach to round one?

No, I mean it is definitely unexpected. My expectation was that I would be finding my feet with the bike, the team, and I was obviously hoping to be towards the pointy end of the field, but I probably didn’t expect to be as strong as what I am. I expected that to happen a little bit later, as the season went on. To be honest, it is definitely a little bit unexpected, but I’m glad that it is going this way [laughs].

Fast forward to the next round at Hidden Valley and your approach to that. I’ve heard people say in the past Queensland Raceway is quite a good track to test at, for Hidden Valley. Is that something that you and YRT are going to take advantage of being located close to QR, to do a bit of testing there, or have you got plans to ride at Hidden Valley before the ASBK round?

At this moment, I’m unaware that we have any plans to test at Hidden Valley. I don’t know exactly what the testing schedule will be leading up to the next round at Hidden Valley. What I do know, exactly as you mentioned, that there seems to be a similarity between the set up from Queensland Raceway to Hidden Valley, the surface of the circuits seem to be quite similar, and a little bit the nature of the turns are similar. If that is anything to go by, it gives me confidence knowing we had such a strong round at Queensland Raceway, and I hope that would translate to allowing us to kick things off on the right foot going to the next round at Hidden Valley.