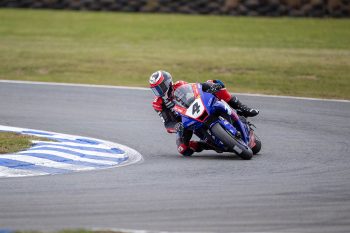 727 Moto Racing’s Broc Pearson has provided an update following his weekend ending fall at Wakefield, stating he avoided any major injuries in that warm-up crash at round two of the Mi-Bike Australian Superbike Championship (ASBK) despite being knocked out.

Pearson made the step up to the premier class this year following championship success in Australian Supersport last season, a highlight in 2022 coming when he qualified P8 on debut at Phillip Island.

After qualifying 14th at Wakefield, Pearson was pushing to get things sorted in Sunday’s warm-up session when he high-sided at turn six, bringing an end to the session and his round three.

“On the Sunday morning warm-up session, when I high-sided I landed on the back of my head pretty hard, I had a concussion – I knocked myself out for a couple of minutes,” Pearson explained to CycleOnline.

“Once I sort of woke up, I guess I hit my head quite hard, it felt quite heavy, I couldn’t really lift my head off the deck, then from that, they thought maybe I picked up a neck injury.

“That’s why I got transported down to Canberra, just to take some precautionary scans to make sure everything was fine, but I got cleared later that day that there were no fractures or injuries, just a bit of bruising around in that area that was causing the pain. Other than that, was just a concussion.

“Got cleared to come home, will probably have to have a couple of weeks off the bike, but other than that I’m okay.”

Round four of the 2022 Mi-Bike Australian Superbike Championship takes place at Hidden Valley Raceway on 17-19 June, giving Pearson seven and a half weeks to recover and build before the next stop on the calendar.