Assorted racer comments following the third round of the season.

In Quotebook, a selection of riders detail how their races played out in the third round of the 2022 Mi-Bike Australian Superbike Championship at Wakefield Park. 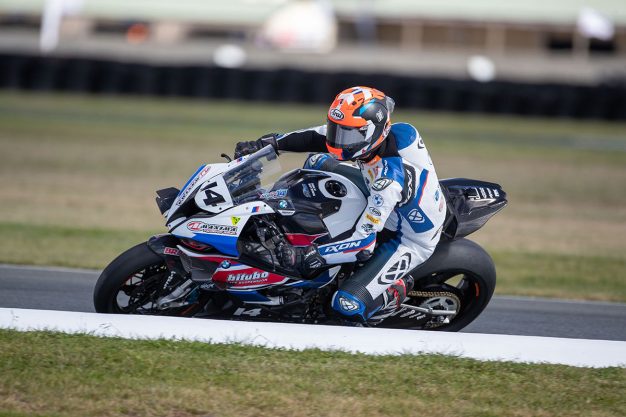 Cru Halliday (Yamaha Racing Team) – Third:
Always good to be back on the podium with the level of competition and gain a few positions back in the championship after the DNF in Queensland. Looking back at it, the first couple of laps of each race probably proved the difference between where I finished and possibly a better result. Race one I run through turn seven and then in race two I got tangled up and lost a couple of positions. I just needed some clean laps to get myself well placed as it’s an easy track to lose time, but a hard track to make it back up as everyone is so close. But I leave here feeling positive and with plenty of fight. There are lots more races and rounds to come and we have the bike working well. The team did an awesome job all week and it was good to get a decent result in front of my friends and family who came out to watch today. Darwin is next up and I’m confident we can keep the good results coming up there

Mike Jones (Yamaha Racing Team) – First:
Another great day for myself and the team, with a round win and Cru in third. That’s the second time in three rounds so it’s a great reward for everyone at YRT and the hard work we are all putting in. For me, I just wanted to keep the momentum going from the last round and keep improving and we were able to do that this weekend. The bike was in the ballpark from the first lap of practice, and we just fine-tuned a few things and got down to a fast race pace pretty quickly. The racing here was intense and you can’t afford to lose your focus for one second or it proves costly. I felt I put in my best 20 laps each time on the track for the first race, that was good enough to win, the second Wayne was able to beat me. Looking at it from a championship point of view, we were able to win the round, gain some points in the championship lead and for me, to make progress at a track that I have struggled at in the past. So, all up a very positive day and thank you to the Yamaha Racing Team again for a massive effort

Glenn Allerton (Maxima BMW) – Eighth:
Wakefield park is usually a good hunting ground for me being as good as a home race. Unfortunately, we struggled to get the grip needed to run the lap times to be in the race for a podium, it was not a lack of trying, but we scored points and regroup for round four.

Josh Waters (Maxima BMW) – Seventh:
Round three didn’t go the way we were all hoping it too. It wasn’t through a lack of trying, we didn’t get the results we were aiming for. The positive is I’m still fourth in the championship and we aren’t far from the top three. The next round is at a circuit personally I really like and the team have had success at before.

Troy Herfoss (Penrite Honda Racing) – Fourth:
That’s the best lap time I’ve achieved on a Friday practice for Wakefield. It felt so good to get out there and be fast from the start. This weekend was the best the team has worked together as well, everyone has found their place in the team, and we are getting the most out of everyone. We all want to win so it’s just a matter of time now. I’m feeling really good and confident after this round, especially after seeing that the race-winning pace was 2-3 seconds slower than last year. It’s not a case of others improving, I’m just not back to where I was. I was just too eager in race two and made a small mistake, but I am still happy with how we finished the weekend. The fans back home were awesome too, and I am grateful for the support shown to our whole team. All I want to work on from the weekend is my patience in the race and getting the most out of the Pirelli in one lap, then I know we will be competing for race wins again. I wish there weren’t two months till the next race, we are on our way, and I can’t wait to get back out there!


Bryan Staring (DesmoSport Ducati) – Fifth:
Two fifth places and I’m back home in WA looking back at what can only be described as a disappointing result for me and the team. We tested quite well but when we got to the race weekend, I never felt the same level of comfort on the motorcycle and essentially, I was constantly looking for more grip out of the Panigale V4 R rear tyre in every session. I was trying really hard, maybe even a little too hard to get the bike to be where I wanted it to be on the track, but in the end the truth of it is that I only really felt good in Qualifying two all weekend. Although it’s a tough weekend, I really want to thank everyone in the team for pulling together, listening, and doing everything possible to keep our heads up despite the challenges on the track. I’m already going over the weekend with Ben and Byron to review before we switch our focus completely to the next round in Darwin.