Flashes of speed for Brookes in stronger Oulton outing 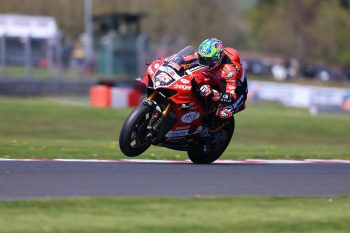 Brookes found a step during FP3 that allowed him to qualify second for Sunday’s race one where he ultimately finished fourth, just two-tenths shy of P2.

Sunday provided its challenges for the number 25, finishing race two in 1oth after a safety car was deployed, then crossed the line in P8 for the final race of the weekend after starting from the fifth row of the grid.

“The first race today [Monday] was disappointing as we made the wrong changes to the bike, and it just didn’t work out,” Brookes explained. “I went backwards and faded pretty much from the start, so it was disappointing for all concerned.

“We put the bike closer to how it had been yesterday and had the information to make only a small change and the bike worked better albeit not with the lap times to compete for the podium.

“It was obviously difficult starting a long way back on the grid too, but I was happy to recover some form at the end. We definitely need to make improvements with the bike as we’re running a similar pace to 2019 and 2020 but things have obviously moved on since then.”

Brookes is 13th in points standings after a difficult round one at Silverstone, the two-time BSB champion eyeing further improvements at the third round of the series on 20-22 May at Donington Park.