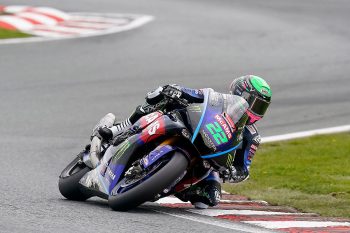 Jason O’Halloran entered the final race at round two of the Bennetts British Superbike Championship (BSB) with a new setting, the gamble of trying a big change ultimately steering the McAMS Yamaha rider in the right direction leaving Oulton Park.

O’Halloran scored a P8 in the opening race, followed by two sixth places in Monday’s outings. While the results were not what the multiple BSB race winner had hoped for, he enters the upcoming rounds optimistic after the insight gained in the final outing.

“I felt like we ended the weekend in a good way,” O’Halloran explained. “It’s difficult when you go into a race with a setting you haven’t used before, so to do my fastest lap of Oulton Park in that situation shows that the bike was better and that I felt better straight away.”

“I made some strong passes and felt like we were in the race. Although we still aren’t where we want to be, I feel like with the setting we have now we can turn up to the next race and tune for the weekend and build the speed and get back in the race.

“When you’re searching for a feeling all weekend like we have been here, every time you go out you try something big which is hard in a race weekend. The last race was very positive, although it’s a sixth place and nothing to shout about we are definitely heading in the right direction.”

The number 22 is sixth in the standings following the opening two rounds, a relatively quiet start to his 2022 campaign after showing strong pace throughout the majority of pre-season testing.

O’Halloran’s next outing comes at Donington Park for round three of 2022 BSB on 20-22 May.