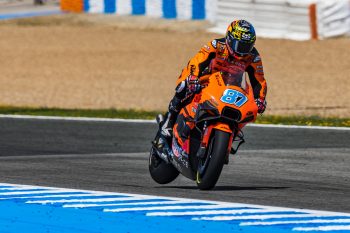 Gardner completed 44 laps during the test, concluding the day in 22nd just 1.453 seconds from the fastest time of the day set by Pramac Ducati’s Johann Zarco.

“Some important learnings and data collected that will be key to continue Remy’s rookie development,” Tech3 KTM Factory Racing shared. “Unfortunately, he crashed in the afternoon after 44 laps. He lost some skin on his left little finger, and bruised his back.

“Nothing is broken, but we took the decision to call it a day so that Remy could go home and get some rest before Le Mans next week. We would like to thank him for his hard work and dedication today.”

The graduating Moto2 world champion enters the upcoming French Grand Prix at Le Mans off the back of a challenging Spanish GP at Jerez, where he crossed the line in P21 after breaking a wing on his RC16 in the early stages of the race.

“I lost my left front wing on the first lap, so I struggled the entire race to ride,” Gardner explained. “It had a big effect and I was wheeling all the time.

“I was unable to go full gas on the straights so I did not have much fun today [Sunday]. You realize how much downforce these wings create when you are riding with only one because you get dragged by one side of the bike and it is really tough to control. I knew we would struggle a bit today [Sunday], but I am sure that we could have done a much better race with two wings.”