Three races to be contested across fourth round at Hidden Valley 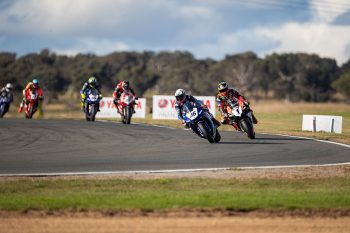 The Mi-Bike Australian Superbike Championship has confirmed that the Darwin only qualifying format will return for the fourth round of the 2022 season at Hidden Valley, all riders notably contesting Qualifying one.

With round four being a 2+4 event alongside the V8 Supercars Championship, stakeholders are provided with an ASBK format that isn’t used at the other rounds of the series.

This includes three Superbike races as opposed to the standard two and Saturday’s Timed Practice removed altogether, which will see the top 12 riders from Qualifying one advance through to Qualifying two.

The format was used last year in ASBK at Hidden Valley, with an additional Free Practice session on Friday for this year’s round – only two Free Practice sessions were provided in the series’ last visit to the circuit. Action commences on 17 June, with no ASBK support classes competing in Darwin, only the premier Superbike class.