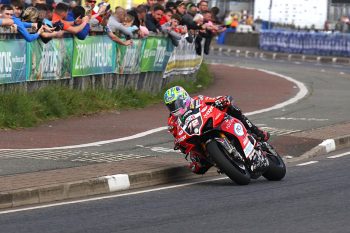 In his 2022 return to the North West 200 (NW200), MCE Ducati’s Josh Brookes scored a podium at the prestigious event, finishing third in the second Superbike race on Saturday.

It had been eight years since the Australian contested the NW200 and he wasted no time getting up to speed, topping the opening session before qualifying P7.

Brookes fought his way to fourth in the first Superbike race and went one better in the final outing to return to the rostrum in the streets of Northern Ireland.

“After a few years away from the roads, the first few laps were quite breathtaking and intense, but I was soon at ease again,” Brookes explained. “It was just a case of getting on with the job and whilst I was quickly up to speed in Tuesday’s qualifying session, I knew the pace would quicken on Thursday.

“We only made small improvements compared to other riders and with a relative lack of track time, especially with not riding in any other classes, we weren’t able to fully try all the changes we made. That meant we went into race day still working on set-up but the changes we made for the two races definitely worked and I ended up setting a new personal best lap.

“It was certainly pleasing to end the week with a podium finish and after eight years away from the event I think, realistically, that’s the best we could have hoped for. The pace at the front was red hot but we got quicker and quicker and we can be pleased with our efforts this week.”

Brookes stated earlier in the year that he had no intention of competing in this year’s Isle of Man TT races, and will return to action in the British Superbike Championship (BSB) this weekend at Donington Park.