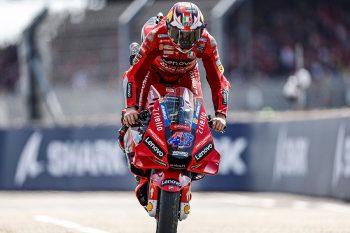 Jack Miller secured his second podium in the 2022 MotoGP World Championship at Le Mans, the Australian managing soft compound tyres to finish the 27 lap outing in a strong P2.

Many riders chose the soft rear tyre option for the race in France, but Miller and Johann Zarco were the only two that finished inside the top 10 who opted for the soft front also.

The Ducati Lenovo rider launched from second on the grid to take the early lead, later trailing Enea Bastianini and teammate Francesco Bagnaia before the Italian crashed out.

From there Miller managed the gap to Aleix Espargaro in third, crossing the line to gain a valuable 20 points for his 2022 campaign.

“With the soft tyre, I knew I had to stay calm, and I tried not to push too hard at the start,” Miller explained. “After ten laps, I started to struggle a little, but towards the middle of the race, I understood how to ride the bike to manage the problem.

“I managed to catch up with Pecco and Enea, but they had a better pace than me. It would have been nice to have three Ducatis on the podium today, but unfortunately, Pecco crashed.

“I’m happy with this second place because it allowed us to gain a lot of positions in the standings, so now it will be important to continue like this to try to shorten the gap in the championship further!”

Following the first seven rounds of the 2022 MotoGP World Championship, Miller sits fifth in the points, 40 behind leader Fabio Quartararo.