Australian continuing to improve with each outing. 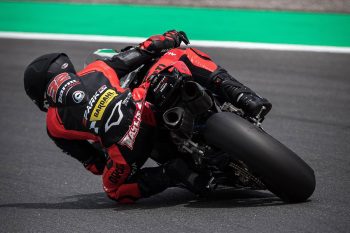 Building off a promising round two at Assen, Bayliss improved once again throughout round three in Portugal, working his way closer to the front as the weekend unfolded.

Superpole saw the Australian qualify 17th, before moving forwards in the first 18 lap race to finish 12th. Bayliss made a great start from the fifth row in race two, making rapid progress to position himself within the top group to ultimately cross the line less than a second from Lorenzo Baldassari in third.

“I am very happy with the weekend,” Bayliss explained. “We were good from Friday to find the right set-up for the bike and the qualifying helped us to start in the middle of the group.

“Yesterday we closed in P12, and I knew I could play for the top 10. Today I had an even better start than in Race 1 and this allowed me to push hard following the group of faster riders, to be in with a chance of the top five. I want to thank the team for their great work and I dedicate to them this great result.”

The next chance for the Panigale V2 rider to continue his charge towards the front comes at Misano – the Barni Spark Racing Team’s home track – on 10-12 June, which marks the fourth round of this year’s World Supersport Championship.