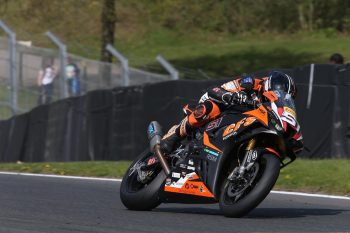 Brayden Elliott secured a breakthrough victory in Pirelli National Superstock during round three of the British Superbike Championship (BSB) at Donington Park, the determined Australian achieving the feat after six years of mixed emotions in the class.

Elliott stormed his way forwards from P7 on the grid to take the victory in race one, emerging on top in what was a five rider battle for the lead.

Race two saw the CFS Filtration No Bull Racing Honda rider show immense pace to set a new lap record, on route to crossing the line in P4 at the end of the 20 lap bout to secure valuable championship points.

“It’s taken me a while to know what to say, I’m still lost for words,” Elliott explained. “Dreams do come true and we are just at the beginning! What a moment to have Eliza standing up on the podium with me, you deserve every bit of it. We walked out of the airport hand in hand with nothing but a suitcase and a dream, today was special.

“P4 in race two and a new lap record, I’ll take that! Felt I had the pace for a lot more yesterday but my strategy could do with some work. Always learning, will take it all in to keep improving.

“A huge thank you to everyone around me, it was a big team effort! Absolutely love to see our little team getting stuck in, I’m proud of everyone involved.”

The number 51 made his debut in the category in 2017 and immediately made an impact by qualifying P3 during his round, Yamaha mounted at the time. Elliott then experienced a challenging stint throughout the back end of 2017 and 2018 but recovered to achieve his first Superstock podium in BSB in 2019.

Making the switch from Suzuki to Honda for the 2022 season, Elliott has experienced a standout year thus far, scoring a podium in each of the three rounds to sit second in the National Superstock Championship standings.