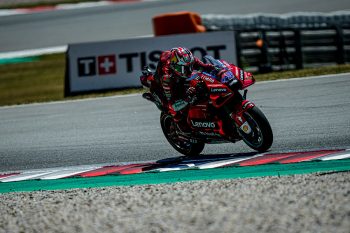 Taking a gamble with a hard compound rear tyre for the 24 lap Catalan GP, Ducati Lenovo Team’s Jack Miller struggled for grip throughout the outing and ultimately finished P14.

Starting from 11th on the grid, it was clear Miller was suffering in the early stages as he rapidly dropped to 17th in the first four laps.

The Australian was able to work his way back as high as 11th, before dropping three places in the closing stages to take two world championship points from Barcelona’s round nine.

“It was a really strange and disappointing race,” said Miller. “I suffered a lot from the lack of grip from start to finish. I decided to race with the hard tyre hoping that I could be strong at the end, but it didn’t work out that way.

“The rivals were able to pass me both on the inside, and the outside and the rear tyre was so worn that I couldn’t keep my lines. It’s a pity.”

Aside from Miller, Johann Zarco, Franco Morbidelli and  Pol Espargaro were the only riders to opt for the hard option rear tyre, Zarco finishing highest placed in third with Espargaro struggling also and crossing the line P17.

Miller sits ninth in the 2022 MotoGP World Championship with the next round taking place at the Sachsenring, Germany on 17-19 June. He is heavily linked to a seat at Red Bull KTM Factory Racing next year.