‘We can say that we deserve this result’ – Gardner 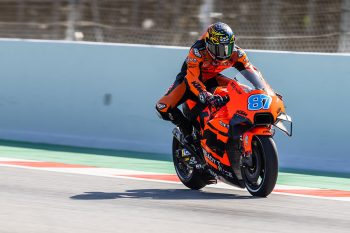 Australia’s Remy Gardner achieved a career-best MotoGP race result at Catalunya with P11, the Tech3 KTM Factory Racing rider displaying great pace in the closing stages to secure a deserved result for himself and the team.

Gardner maintained throughout the weekend that his focus was on race pace, and despite finishing 23rd at the conclusion of free practice, the race-driven approach paid off in the 24 lap outing on Sunday.

After four laps of the 2022 Catalan GP the number 87 was inside the points, and from there worked his way up to battle with Franco Morbidelli and Darryn Binder in the closing stages. In what was a great last lap for Gardner, he passed both on route to securing five championship points for his efforts in Barcelona.

“We got a good result which is really encouraging for the team and myself,” Garnder exclaimed. “There have been a lot of crashes, but I managed to stay on two wheels and fight until the end.

“I was even able to overtake both Franco Morbidelli and Darryn Binder in the final lap, so we can say that we deserve this result. I am really happy for everyone involved, and we now need to continue in this positive direction.”

The result comes as a timely boost for Garnder amid heavy speculation surrounding KTM’s MotoGP lineup for next season. He will be looking to carry the momentum into Germany where round 10 of the 2022 MotoGP takes place at the Sachsenring on 17-19 June.