WorldSSP rookie on that breakout Estoril performance and 2022 season.

Teenager Oli Bayliss stamped his arrival on the Supersport World Championship (WorldSSP) stage as he charged through the field to finish P6, less than a second from the podium in race two at Estoril. The Australian has been making significant progress throughout each of the three rounds so far this season, with Misano’s fourth round this weekend the first circuit he’s had the chance to ride at prior. The Barni Spark Racing Team talent shares his Fast Thoughts on that breakout performance and his rookie 2022 WorldSSP campaign in this latest feature. 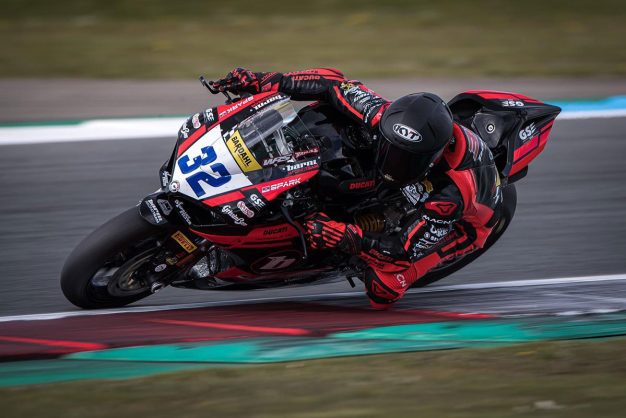 Seeing the raindrops, there are a couple of race tracks in Australia where that exact situation would happen a lot, where it’s kind of sprinkling but the track’s not wet, but it kind of plays with your head a little bit. After a couple of laps, a bit of rain going on the visor, the track didn’t lose any grip itself and we kept pushing a long. I got a pretty good start and the lead group was I think six seconds or four seconds ahead, I think it was out of turn seven where each lap I was marking where they were, and I realised I was catching them a little bit. If we can push for a good result, then that’s what we’re obviously going to do. I realised I’m catching them, so I put my head down. We ended up there and as soon as I got there, I thought I could calm down a little bit, but everyone started dive-bombing everyone. It definitely put the heart rate up a little bit, just because it’s the first time I’ve had four guys going up my inside in one turn! It’s good and I know what I need to work on for the next round and the team knows what they need to work on for the next race.

Fighting for a podium in WorldSSP…

It felt great and it honestly felt normal once I got up there. Hopefully we can keep on doing that, it was a good battle we had with, I think, seven riders or so. There was a lot of passing going on, it was a good place to be and it definitely helped me learn new things of where I can improve and where I feel I’m a little bit stronger than the other guys. Everyone’s got their strong points, everyone uses them to their advantage. I think, for me, I just struggled to open the gas at the same point, I think I have to wait a little bit longer and I’m struggling with the grip on the first initial twist of the throttle. 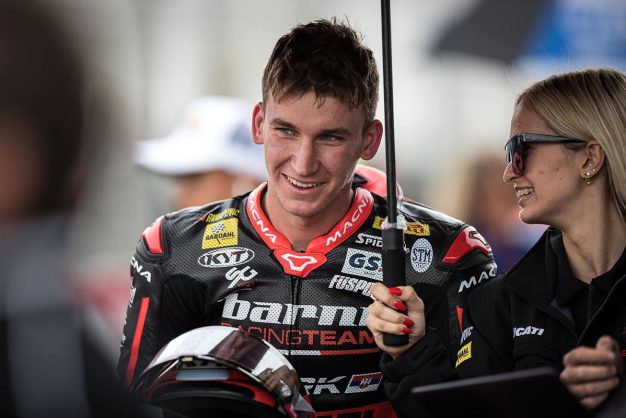 Learning the tracks on the WorldSBK calendar this season…

Basically, it’s just every track we go to, it’s a new circuit for us. On Friday, we get two sessions and then our third session at that track is Superpole. We try not to rush the free practices too much because we really cannot afford to have a crash or a bike drama in those free practices. We just really use free practices to learn the track, try to get a comfortable feeling on the bike and then when it comes to Superpole, it’s really the first time we start to push. Every weekend, I get a better feeling with the bike and I’m starting to learn the tracks a little bit quicker so hopefully we can keep doing that.

The upcoming Misano round…

We’ve got a good setting there. We didn’t do a bad time at the test for our first time there. I’m sure when we go to Misano next weekend, we’ve got the setting, I know the track so hopefully we can get up to speed pretty quick and be a bit closer to the front at least, because I’m making it difficult for myself starting from pretty far back. We’re making it work, but it’ll be better to start a bit closer up to the front.