Herfoss to use special indigenous livery in Darwin

Design to be featured on Penrite ASBK and Supercars at Hidden Vallley. 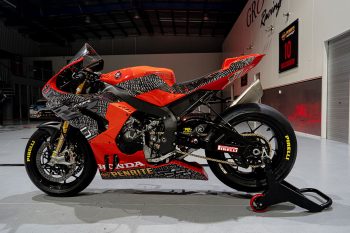 The story depicted within the livery is based on ‘The First Bees’ and ‘Freshwater Mermaid’ artworks created by Kabbindi, with the three different colours each representing the bees.

“It’s really cool to be supporting the indigenous round and aligning ourselves with Penrite Racing Supercars team again,” Herfoss explained. “It was a lot of fun spending the day with Lee [Holdsworth], Dave [Reynolds] and the team in Melbourne during our visit to MITS [Melbourne Indigenous Transition School].

“Partnering with the school and connecting to an organisation that supports young aboriginal people from regional Victoria and the Darwin region who want to access education in Melbourne has been great and I am proud our teams are supporting this. I’m also looking forward to showing off the new livery, of course.”

The design will also be featured on the Penrite Racing Supercars team in Darwin with the two-plus-four event at Hidden Valley that also incorporates the Merlin Darwin Triple Crown round of the Repco Supercars Championship to commence on 17 June.