First laps back complete for double Australian champion at SMSP. 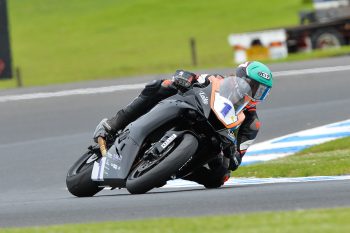 Youthful talent Tom Toparis is targeting a Mi-Bike Australian Superbike (ASBK) return at Morgan Park in August, having completed his first laps back on a bike at a Sydney Motorsport Park (SMSP) track day.

The Double Australian Supersport champion spent over a year on the sidelines after he elected to undergo a humerus bone operation to correct growth arrest.

While he spent his first outings back on a Supersport machine, it is understood that Toparis intends to race in the Superbike class when he returns to national competition from Morgan Park onwards.

“I actually felt good by the end of it,” Toparis told CycleOnline.com.au. ” There were two days in a row, and I did the end of the first day and the whole of the second day. The first sessions felt so strange, it’s been 14 or 15 months so to get on a bike after that long was quite strange, but by the third or fourth session I started feeling good, and by the end of it I was kind of surprised with how good I felt really after so long off of the bike.

“I planned to come back for Darwin, but of all of the rounds to get back into that was the hardest one, getting up there is a bit of a mission, and also I have only really done the one ride day. I planned to do some days at Wakefield but it’s been so cold that they just cancel the day before it even happens.

“If I had gotten four or five ride days I would have gotten up there, but I’ll hold off at Darwin and get back into it at Morgan Park.”

Toparis maintained that if the right opportunity arose that he would head overseas later in the year, having previously achieved success in the German-based IDM and British Supersport series’.

“I’ll see where we are at later in the year, I think by the time the season gets going again in August, there could be a chance if I am doing alright, if someone overseas gets injured or there’s an opportunity… I’m still in contact with all of the guys over there,” he added. “If there is a seat, I would love to fly over there and do a round or two, just depends on the timing of when their season ends.”