Points again for Kelso in Spain as consistency builds

Fast qualifying affirms once more that speed is there. 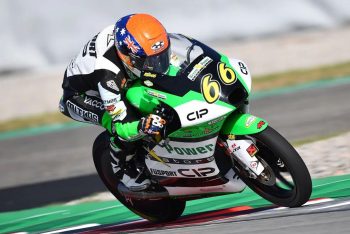 CIP Green Power’s Joel Kelso continued to build his consistency at the ninth round of the Moto3 World Championship in Catalunya, landing his fifth point scoring position of the season in 12th after qualifying a solid P9.

The Australian teenager jumped to a top-five position in the early stages of the Catalan GP but was relegated back to 16th on lap five.

In what ended up being a spread out race by Moto3 standards, Kelso remained in the leading group until lap 16 when eventual race winner Izan Guevara put the hammer down at the front and started to stretch the field, the KTM rider ultimately scoring four points at the completion of the 21 lap outing.

“Honestly, it was a very positive weekend overall,” Kelso reflected. “We worked really hard with the team. Unfortunately, we couldn’t find enough pace in the race. We just need to find that extra bit to make the difference.”

After a warm-up collision in Jerez that saw him taken out, Kelso was forced to sit out the race at the following Le Mans round earlier in the season, despite pushing through the pain to qualify 11th at the French circuit.

In his return at Mugello, he finished P12 – just over half a second from P7 – and sits 19th in the Moto3 World Championship standings after Catalunya.

The next round of the championship takes place at Sachsenring, Germany on 17-19 June, a venue where Kelso made a wildcard appearance last year in Moto3 with his current CIP Green Power Team.