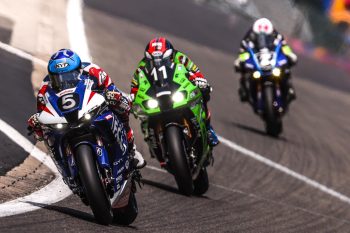 It was an eventful 24H Spa Endurance World Championship (EWC) Motos for Josh Hook’s F.C.C. TSR Honda France team, recovering from a broken chain to secure a podium by just half a second.

Hook launched to second from a P4 qualifying position in the opening lap in Belgium, with the team maintaining a place in the top three for the first 10 hours of the race.

The squad managed to take the lead before a broken chain set them back at the 15 hour mark, forcing the bike to be pushed back to the pits and relegating them to 10th.

By the time red flags came out and caused a two-hour delay to clean up a substantial oil spill, the F.C.C. TSR Honda France team were P4, with Gino Rea making a decisive move to secure P3 in the final moments of the race once resumed.

“After the red flag, we thought it was over, and we accepted this fourth place,” Hook explained. “When we heard that we could go back on track, we didn’t really know what could be done for us. Gino did an incredible job, we owe him a lot for this podium. He didn’t give up and it paid off. A big thank you to my teammates and the whole team, because even if we came to win, we can be happy with our weekend and focus on Suzuka.”

F.C.C. TSR Honda France sits second in the 2022 EWC standings following the first two rounds thanks to P3 at Spa and a third in the Le Mans 2022 Hour earlier in the year. The next stop on the calendar is the Suzuka 8 Hours on 7 August.