Reflecting on recent visits and memorable moments in Darwin.

The unique layout of Hidden Valley Raceway combined with scorching temperatures in Darwin provides a mental and physical challenge to the riders each time the Mi-Bike Australian Superbike Championship (ASBK) reaches the Top End. With the series returning to the venue next weekend, we Rewind and reflect on national outings at the circuit since the ASBK has been back under Motorcycling Australia (MA) management.

2017 was the first time ASBK had been to the 2.870km circuit in four years and it was a weekend to remember for Josh Waters, then taking his Team Suzuki Ecstar machine to a decisive double victory. The event also saw Troy Herfoss debut a new CBR1000RR SP2 with Crankt Protein Honda Racing under the ownership of Paul Free.

In race one it was pole-setter Daniel Falzon (Caterpillar JD Racing Yamaha) who led the field in the early stages. Falzon lodged a new lap record of 1m06.097s before a crash on lap five saw him relegated down the order, allowing Waters to secure the lead and take over at the front.

Just laps later a multi-rider incident including Falzon again saw the race red-flagged, as Kyle Buckley (Kawasaki BCperformance) was attended to by the Racesafe Medical Team, ultimately requiring surgery on a broken ankle. 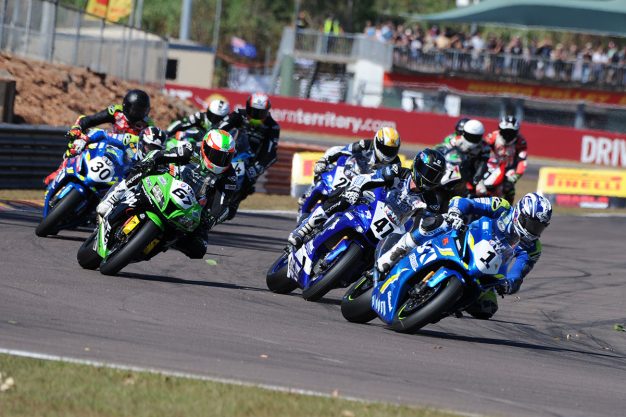 On the restart, Waters controlled the race with eight laps to go, taking his first win of the season with 0.453s margin over Herfoss and Wayne Maxwell, who was part of the Yamaha Racing Team at that point of his career.

Come race two later in the after afternoon, Falzon once again shot through to the lead, but it was race one winner Waters who stole the number one spot in the opening laps, setting a new lap record of 1m05.986s in the process.

The race was red-flagged for the second-consecutive time on lap 16 of the scheduled 17 due to a track obstruction, declaring Waters as the winner with a commanding 2.868s advantage. He took the overall from Herfoss and Maxwell.

Fast forward to 2018 and Penrite Honda Racing’s Herfoss extended his points lead in the standings after going 2-1 for the overall. A thrilling opening Superbike affair saw DesmoSport Ducati’s Troy Bayliss inch to his first victory since making a comeback to the sport that year, fending off a final lap attack from Herfoss to cross the finish just 0.204s ahead in a popular result. 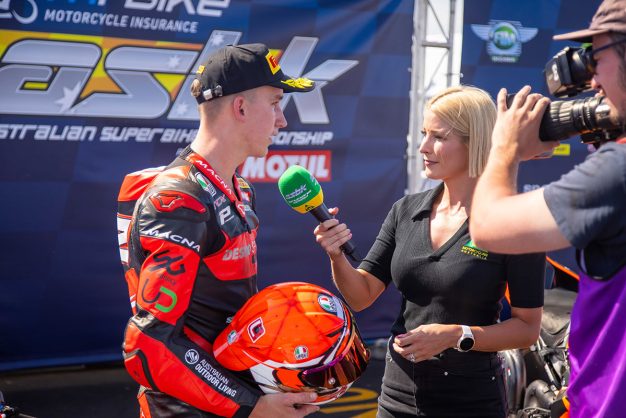 The race was initially started and then red-flagged due to Jamie Stauffer (McMartin Racing Ducati) going down when Bayliss was at the front. Once they got going again, Bayliss once again led from the outset and that’s where he would remain, controlling the race despite all kinds of late pressure from Herfoss and third-place finisher Bryan Staring (Kawasaki BCperformance). That trio crossed the line within 0.690s of each-other at the end of 16 laps upon the restart.

Herfoss stalked Bayliss for the opening portion of the 18 laps, but a series of mishaps including two off-track excursions saw the latter ruled out of contention, eventually crossing the line in P7. But it appeared to be Herfoss’ race to lose, going on to win by 1.147s with a new lap record of 1m05.904s. He crossed the line ahead of Staring and Maxwell (Yamaha Racing Team). Overall on the podium it was Herfoss who won, with Bayliss salvaging P2 and Staring third.

Following a couple of years away, the championship returned to Hidden Valley in 2021 in a two-plus-four event alongside Supercars, with Maxwell (McMartin Racing Ducati) entering the round with a 10-point advantage over Penrite Honda Racing’s Herfoss.

Multi-time champion Mike Jones (DesmoSport Ducati) was forced out of the weekend prematurely when he crashed during qualifying and damaged his hand, plus he also dislocated toes during the event when he was one of many riders hit a curb at speed.

Race one saw a spectacular battle between arch-rivals Herfoss and Maxwell, with the Honda rider making the move when it counted on the last lap to secure a slim 0.060s victory. Maxima BMW’s Glenn Allerton was third, debuting the M 1000 RR with much promise.

Unfortunately, race two was ended prematurely when Herfoss crashed at turn three on the opening lap of a restart and made heavy contact with the air-fence, which lifted and caused him to hit the concrete wall and sustain severe injuries. That race was declared without a lap being completed. Later, the final outing of the weekend saw Oli Bayliss (DesmoSport Ducati) rise to take a career first Superbike victory by less than two-tenths ahead of Maxwell.

The race also involved a scary, high-speed incident where Matt Walters (Kawasaki Connection) had no brakes going into turn one, which brought down himself and Corey Turner (52 Motorsports) – in what was a miraculous save nonetheless – saw the red flag come out after four laps.

In the restarted eight-lap bout, Bayliss followed Maxwell for much of the opening six laps before making a decisive move with two to go, setting the current lap record of 1m05.445s on route to victory. Allerton backed up his podium in race one with another third, as the overall was won by Bayliss by a single point over Maxwell.