Agius rises to the top in FIM JuniorGP Moto2 at Catalunya 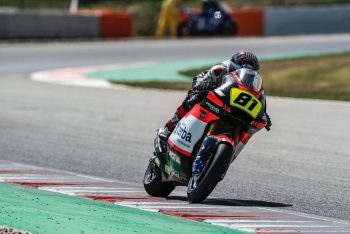 Promo Racing’s Senna Agius stormed to two commanding FIM JuniorGP Moto2 victories at Catalunya, winning the second bout by over 12 seconds to confirm he is a force to be reckoned with in the championship.

Agius showed great pace in all conditions, especially the heat, throughout the weekend and qualified second, just over a tenth from points leader Lukas Tulovic on pole. Agius’ qualifying time of 1m43.703s was a tenth quicker than Celestino Vietti’s Moto2 World Championship pole time at the venue a week earlier.

In race one the number 81 trailed Tulovic until two laps to go when he made a decisive move and ultimately grabbed his first win in the category by 0.668 seconds. Taking the lead on lap three in the second bout, Agius dominated on the hotter track temperature to take the victory by 12.132 seconds.

“Today was a result of our process,” Agius shared. “We have only just started but this feels like a long time coming. Thanks to my team, family and supporters for everything.”

Agius has finished on the podium in four out of the five races so far this season, his only real blemish being the crash at Valencia while battling for the lead. He is second in the championship following the opening three rounds in 2022, 25 points back from Tulovic as the series heads to Jerez on 17 July for the fourth stop.