Australian teenager Luke Power has made strong progress in his rookie MotoAmerica Supersport campaign, highlighted by an impressive second-place finish at Road America where he bested a host of seasoned contenders. CycleOnline spoke to the 3D Motorsports rider in this Conversation to get his take on racing in America on iconic circuits like Daytona, the hurdles he has faced overseas and the process to adapt to the MotoAmerica spec machines and layouts. 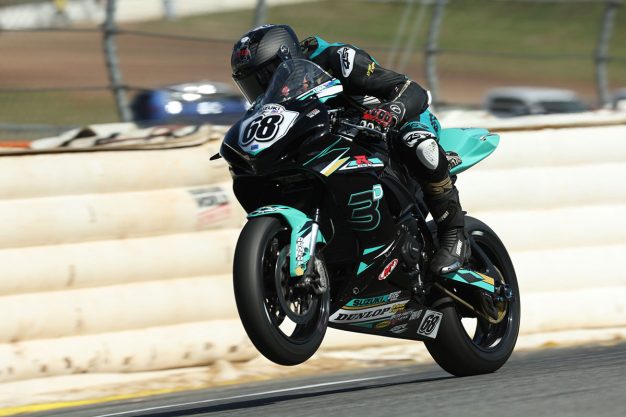 It’s been great to see Australian representation in MotoAmerica. How did the opportunity with 3D Motorsports came about, and what motivated you to go and race in the states?

So the way I actually got in contact with the team was through my mate Joe Mariniello who signed for the team through a mutual connection in about October, September last year. At the time, we were still locked down in Melbourne and everything, I just wanted to get away. I got in contact with the team manager and had some talks, not long after that got it sorted to come over for this year and I’m absolutely stoked. The results this year haven’t really been what I have wanted until the last round, stuff is starting to click now. It’s a super, super competitive championship, all year I have felt like I have been riding my butt off and doing everything I can. In Australia, that would be enough to put me top five consistently, whereas here I’m battling… it’s been a bit hard, there’s a lot of stuff outside of my control that has happened. I got really sick at the first MotoAmerica round, and in Daytona there were a couple of issues as well which weren’t ideal. At the last round, we didn’t have near as many problems, there was nothing outside of our control that happened. I made a mistake in qualifying two at Road America which resulted in me crashing and giving the team more work to do, but that was sort of the most accident-free or setback-free weekend that we had. I think it showed with the potential we showed and the podium we got. As I said, it’s a super tough and competitive championship, but I absolutely love it, everyone is so nice and they all go out of their way to help you. It’s a really cool environment to be in, especially as someone coming from overseas.

You mentioned a few things there, I’ll touch on Daytona first. From what I understand that was your first race in America. How was that experience, I know things didn’t really go your way in the race but can you talk us through the experience of riding at a venue like that?

We were doing probably 270kph on the 600 around there, that was absolutely awesome. It didn’t feel like it, you don’t feel like you are going that fast, but it was awesome. It was really cool, we rocked up there on the Wednesday, and going through the tunnel at Daytona you get all of these butterflies. The atmosphere as well, that was unreal, and there are so many spectators around there. It was a little bit daunting I guess, because it was my first ever race meeting over there, and it’s such a well-known track and event [the Daytona 200]. It was different, good different, it made me excited and nervous at the same time. Some stuff happened that made it tough, I was put in the B group which was unfortunate because it set us back big time for that weekend. It was still an awesome learning opportunity, I had a great time and the highlight of riding that track was going around the banking, you struggle to walk up the banking because you can touch the asphalt in front of you when you try to walk up it. It was such a cool experience, I’m a little bit bummed because we had a couple of problems that weekend that were out of our control, I only got to do 20 laps.

With Daytona as an example only getting to do 20 laps, how much riding are you able to do at these circuits before you go into a race weekend. Some of the tracks over there are quite long, what’s the process you use to learn the circuits?

It’s a bit of a funny one, because I haven’t had any chance to test at the tracks so far, purely because before Daytona… you can’t test at Daytona because there’s two races there each year, and one of those is in October, so I wasn’t in the country. In terms of Atlanta, I don’t remember any testing available there either. After Atlanta, I went to England to get a visa so I could stay here, and obviously I couldn’t test while I was there. I arrived 1am in the morning before practice at Virginia as my visa arrived 24 hours before, so it was quite stressful and didn’t have time to test there. In terms of Road America, we only had two weeks between rounds so it fell within the testing ban rule – you can’t test within a month or something like that ahead of a race meet. So I’m not testing at The Ridge as well, because we are in Oklahoma at the minute, so we won’t test there or Laguna Seca because it’s not really viable for the team, it’s very, very pricey considering how far away they are. We are going to get to test at Barber, before that race meet, and potentially a couple of other rounds as well.

It’s been more beneficial testing at local tracks trying to find a really good base setup on the bike, and that’s been the biggest help so far. During the MotoAmerica race weekends, we have a 30 minute practice session in the morning where I do 15 laps or so throughout the whole session, and that’s coming in and out to try and maximise the amount of changes we are making to get the bike set up right, also trying to go out with guys who are experienced around the track. I have a slightly different approach to some people, I like to go on the XBOX and ride the tracks, I do a lot of study – I watch previous races, onboards, get track maps and write a whole page full of notes on the tracks to try and… just so that I have done a 100 laps in my head before I get there. I like to do laps on the bicycle as much as I can as well, and do everything that I can. I’ve only got 30 minutes before qualifying and after qualifying I would have maybe had an hour and a half, which is a lot of time, but in order to learn a track and be able to do times that are competitive with the likes of Josh Herrin and Tyler Scott it’s definitely difficult. Every little bit helps. 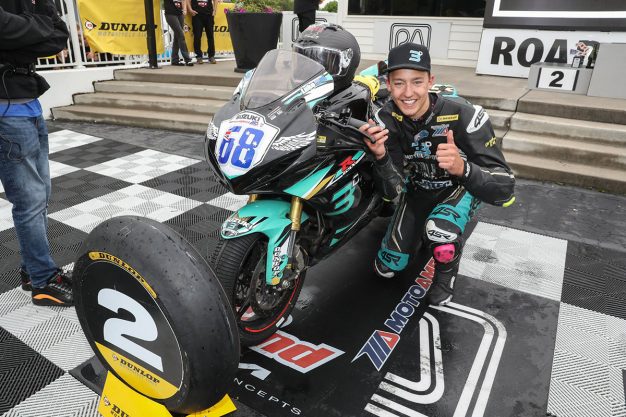 It’s that balance isn’t it, making enough changes to get comfortable and enable you to go fast but not make too many that it limits your time on the track to learn it. I understand the 600 rules in MotoAmerica are different to those in the Mi-Bike Australian Superbike Championship (ASBK). You switched to a GSX-R750 at the last round, what inspired that move and can you explain some of the differences in the specifications of the bikes, between there and here in Australia, that you’ve had to adapt to?

The first big thing was switching from the Kawasaki, they are two completely different bikes in the way you ride them. Then the rules are completely different here, and the Kawasaki I was riding in Australia was slower than what the bikes are over here. It was all a big learning game at the start of the year, and it still kind of is. In terms of the 750, it’s part of the next generation supersport rules, which allow the Ducati V2, the Triumph 765 and so on. We were hoping to be able to run the 750 at Daytona, because we heard about it towards the end of last year. Unfortunately, there was some stuff going on with Team Hammer, they were trying to get the required parts to make the bike fly-by-wire throttle system. We didn’t end up getting those parts until just before Virginia, only a day or two before the event which was not what we wanted. I didn’t want to have to get off a plane at 1 am in the morning, rock up to the track and try to learn a new bike so we stuck with the 600 at Virginia. We did one test on the 750 – which didn’t exactly go to plan – at one of the local tracks, and we managed to get the bike to Road America and I got to ride it there. It’s a different bike – it’s the exact same chassis, the difference is in the engine. The way you ride it is different also, it is nice to have a bit more grunt, but it has its flaws as well as the benefits. It’s always learning over here, which I love. I love improving every time I go out and seeing the benefits in the way I ride and the end result as well.

Looking at the MotoAmerica Supersport Championship standings, you are fifth, only 13 points from second. You mentioned that the results in the first couple of rounds weren’t what you had hoped for, but sitting where you are now, is that where you expected to be at this stage in the season? And building off that, I know it’s still relatively early in the year, but have you had consideration or interest as to where you will end up next year?

Every rider is focussing on the future, no rider is ever happy until they are Valentino Rossi or [Marc] Marquez winning races at GP level. I’m always looking to the future, I have an end goal which is to be a MotoGP rider as I’m sure every kid my age does as well, but I have some different plans or routes of getting there which I have been discussing with my manager and parents. The main focus of mine is results, you can’t expect to go to MotoGP after not having won a national race or having won a national championship, or wherever you stand with results. The results back everything else, you can’t just be a good kid or a fast rider, you’ve got to have results to back that, that’s my main goal. In terms of have I expected these results, I wouldn’t say I expected them but I didn’t doubt them. I don’t want to sound arrogant but every rider has to have some level of self-confidence, coming into this year I was like ‘well I don’t have an expectation, but if I can be up there I can be up there, if I’m not up there I’m going to figure out a way to get up there’. I know that I have the ability to get there, the guys that are winning are human, and there’s no reason why I can’t brake at the same point, get on the gas at the same point, ride a bike in a different way but still get the same lap time.  For me, I didn’t necessarily think I couldn’t get there, but I didn’t expect to be there the straight away.