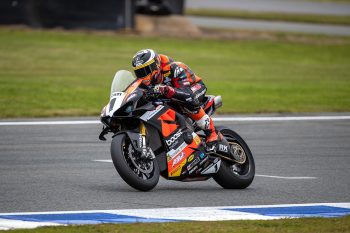 Boost Mobile with K-Tech McMartin Racing Ducati rider Wayne Maxwell sees the three-race format at Darwin’s round four of the 2022 Mi-Bike Australian Superbike (ASBK) Championship this weekend as an added opportunity to claw back points in his bid to achieve a record-breaking fourth ASBK title.

Maxwell was left to rue a costly race one mistake at Phillip Island which admittedly has put him on the back foot in the championship race, despite recovering to win race two at the opening round and securing the second race victory at Wakefield.

The current ASBK champion enters Hidden Valley 23 points from title-rival Mike Jones. The unique format in Top End as part of the two-plus-four event with the Repco Supercars Championship means a maximum of 76 points are on offer as opposed to the usual 51 per round, adding more value to a strong weekend for a rider.

“That part of it for me, I can really claw back some points, I can make up some time so let’s just see how it rolls in,” said Maxwell. “It’s a good Ducati track, there was a Ducati lockout on the front row there last year so hopefully we can be super strong and continue that momentum of the Ducati and come out Sunday with the maximum points and claw back a few in the championship.”

Ducati has historically been a strong platform at Hidden Valley with Oli Bayliss and Maxwell going 1-2 overall last year at the venue onboard their V4 Rs. Prior to that, when the series visited the circuit in 2018 Troy Bayliss secured a popular race one victory with DesmoSport Ducati on the 1299 FE.