Disaster for Maxwell in race three with fall at Hidden Valley. 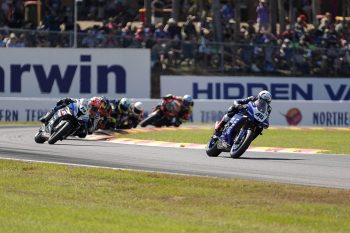 Yamaha Racing Team’s Mike Jones secured the overall victory at the fourth round of the 2022 Mi Bike Australian Superbike Championship (ASBK) in Darwin, as title-rival Wayne Maxwell fell in the final bout this afternoon.

Maxwell claimed a vital victory in what was a thrilling race two at Hidden Valley this morning. The Boost Mobile with K-tech McMartin Racing rider clawed his way back to take the win after a disastrous launch from the line saw him eighth through the first turn.

He held out a late-charging Mike Jones (Yamaha Racing Team) to take a 0.249s victory, Jones himself having to fight his way back through the field after dropping to fifth mid-race, and finished P2.

Bryan Staring (DesmoSport Ducati) was leading with three laps to go before a decisive move was made by Maxwell into turn one, the number 67 then passed by Jones in the same spot on the last lap. He ultimately finished third.

Penrite Honda Racing’s Troy Herfoss backed up his impressive race pace yesterday as he crossed the line fourth, and was right in the mix in the leading group until lapped traffic hampered his charge in the closing stages.

YRT’s Cru Halliday was fifth ahead of Josh Waters (Maxima BMW) in P6. Arthur Sissis (Unitech Racing Yamaha) made a great start to jump to lead and hold first for the opening laps before a costly mistake at turn one while running towards the front dropped him out of contention.

Despite the mistake, the South Australian finished P7, as Daniel Falzon (Caterpillar Yamaha), Anthony West (MotoGo Yamaha) and Lachlan Epis (BMW Alliance Racing) completed the top 10, Epis having to charge back from the tail end of the field following an off-track venture.

Jones delivered a clinical performance in the final race of the weekend to claim a commanding 6.5 second victory. Maxwell took the early lead as he and Jones traded places throughout the opening laps.

Allerton made another great start from tenth on the grid to be fourth by the end of the first lap, and moved Maxwell as the race approached the halfway point. Maxwell found his way back through on the BMW rider before disaster struck at the hairpin, turn six, on lap seven as the number 47 tucked the front and crashed, ruling him out of contention.

A five-rider dogfight for P2 ensued, with Allerton countering a move made by Herfoss in the last sector this finish second. The Honda rider finished third, again showing great pace in the second half of the 16-lap race to work his way into the podium fight.

Staring finished fourth just two-tenths adrift of the podium as Sissis capitalised on a last-lap mistake from Halliday to complete the top five, with the YRT rider crossing the line P6.

Seventh was Waters who ran off the track at turn one on lap one, as Falzon, West and Mark Chiodo (Yamaha) completed the top 10. Maxwell was able to remount and finish 11th.

Jones took the round four overall ahead of Herfoss second and Staring third on countback over Maxwell. Looking at the championship standings, Jones leads by 40 points from Maxwell, with Staring third a further seven adrift. 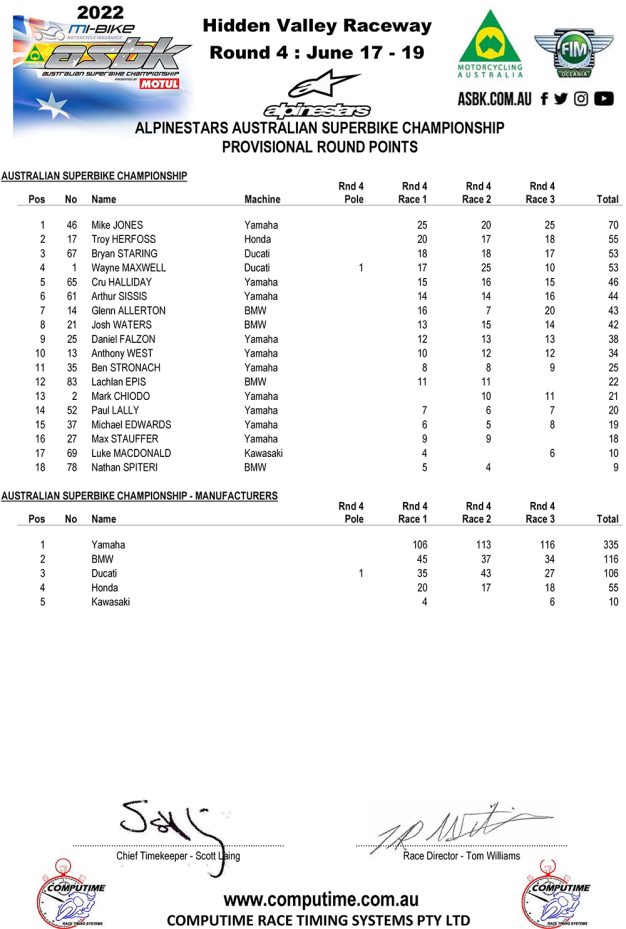