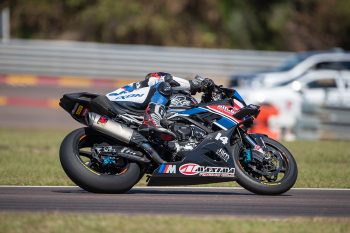 A counter-move from Maxima BMW’s Glenn Allerton allowed him to secure a podium in the final race at Hidden Valley as he was able to ‘lure’ Troy Herfoss into making a pass in the final sector and cut underneath the Honda rider on the exit to take P2.

It was an up and down weekend in the Top End for the three-time Australian Superbike (ASBK) champion, forced to start each of the three races from tenth after having his fastest time removed in qualifying two for exceeding track limits.

Allerton was a rocket off the line during round four of 2022 Mi-Bike ASBK and finished the first race in P5 before a mechanical issue forced him to salvage points in race two as he crossed the line 14th. Race three saw the M 1000 RR rider utilise his experience and racecraft to return to the rostrum after what has been a challenging start to the season.

“[Race three] turned into a different race I think,” Allerton recalled. “Initially you are pushing really hard at the start, but once you know what you have got, you have a look at each other and see what their weak spots were.

“When Bryan [Staring] came by me, I sat behind him for a lap and I actually thought to myself, ‘I’ve got more grip than this guy does, I’m going to beat him I just need to get myself in a position to do it’.

“Then Troy [Herfoss] came past me, and it upset my plan a little bit, but you’ve got to change the strategy on the run. The strategy then became, okay I can see Troy’s got grip, more than Bryan did, and he was more confident than Bryan in a couple of areas.

“I needed to just sit on Troy, and when he made a move, make a move straight away on Bryan as well, which I managed to do. It was a matter of pushing as hard I as could and covering the inside, he [Troy Herfoss] is always going to go inside up there in the last two corners and I knew it, so I kind of… I rode tight on the entry to make him go even tighter than normal.”

Herfoss is renowned for having no shortage of spirit or try, and he indeed attempted to make a move into turns 10 and 11 on Allerton to retake second from the number 14.

“All I wanted for him to do was commit more than he wanted to, so he would roll wide on the exit, so I could drive out of the last turn and it pretty much played out exactly how I wanted it,” Allerton added.