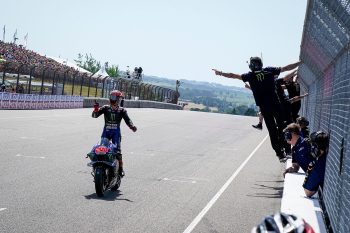 A dominant performance at the Sachsenring for round 10 of the 2022 MotoGP World Championship from Fabio Quartararo saw him take a decisive victory, as Augusto Fernandez annihilated the Moto2 field and Izan Guevara continued his strong run in Moto3 to stand on the top step.

Quartararo (Monster Energy Yamaha MotoGP) progressively extended his advantage to take a 4.939 second victory at the end of the 30-lap outing, ahead of fellow Frenchman Johann Zarco (Prima Pramac Racing) who delivered a solid ride to cross the line P2.

Notably, fastest qualifier Francesco Bagnaia (Ducati Lenovo Team) lost the rear at turn one on lap four, and was unable to complete the race after the fall. Maverick Vinales (Aprilia Racing) was challenging teammate Espargaro and Miller for the podium until his rear ride height device failed on lap 18, causing him to retire from the race.

Australian Remy Gardner (Tech 3 KTM Factory Racing) crossed the line P15 to score a point, as Alex Rins (Suzuki Ecstar Team) withdrew from the event on Saturday due to injuries sustained in the turn one incident at round nine in Catalunya.

Quartararo enjoys a 34-point lead in his title defence ahead of Espargaro, as Zarco is third in the championship race, a further 27 points back. 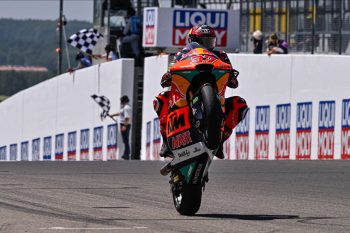 Fernandez made his move for the lead past Sam Lowes (Elf Marc VDS Racing) on lap six and didn’t look back, as Acosta charged from P11 on the grid to secure the runner-up position, ahead of Lowes who completed the podium.

It was a disastrous race for championship leader Celestino Vietti (Mooney VR46 Racing Team) who crashed out of P11 on lap 22, but still holds the points lead on 133, ahead of Ai Ogura (Idemistu Honda Team Asia) with 125 after he finished eighth in Germany. Fernandez is now third in the Moto2 two standings on 121 following his victory at the Sachsenring. 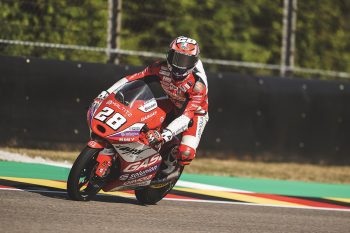 In Moto3, Izan Guevara controlled the race at the front to take a convincing 4.8 second win ahead of Leopard Racing’s Dennis Foggia.

Guevara (GasGas Aspar Team) gradually increased his lead to a second in the first nine laps to break the tow, and from there extended to take his second win in a row and reduce the points deficit to teammate and championship leader Sergio Garcia to seven.

Garcia completed the podium at round 10, as Foggia’s podium elevates him to third in the standings, 51 points from the lead.

The Red Bull Rookies Cup riders were also in action in Germany, with Australian Harrison Voight achieving a podium with P2 in race one, followed by a seventh in the second race. 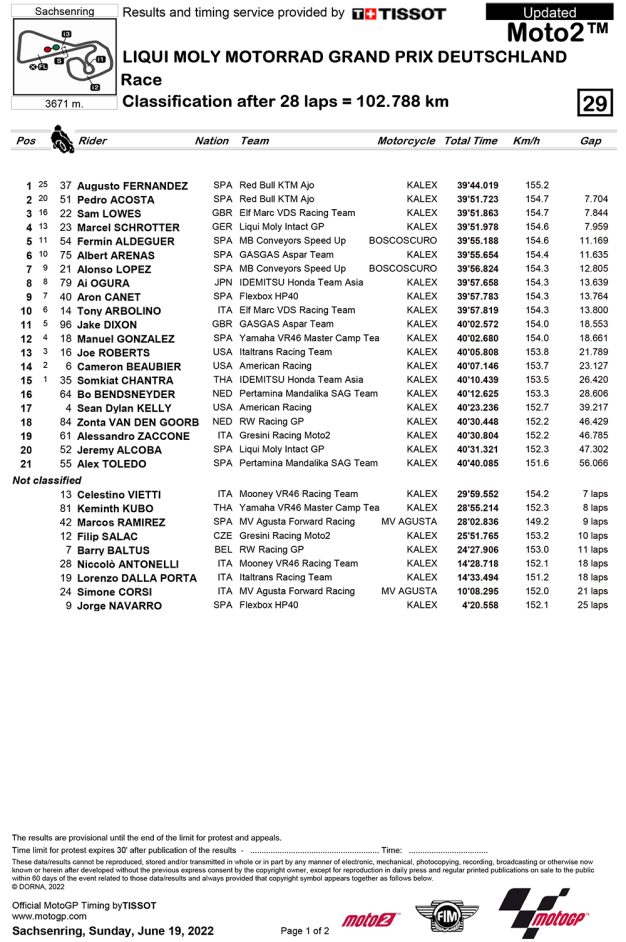 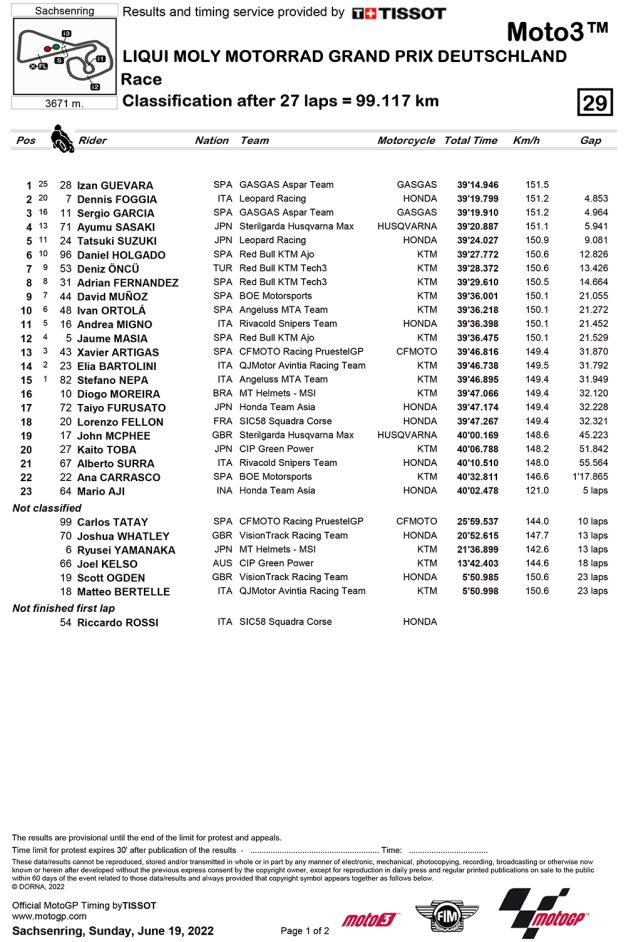