Australian returns to the MotoGP rostrum with strong recovery. 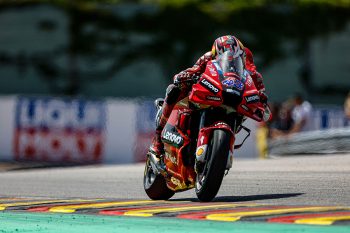 Ducati Lenovo Team’s Jack Miller overcame a long lap penalty in Germany to achieve his third podium of the 2022 MotoGP World Championship season with P3 at the Sachsenring.

The Australian showed strong pace throughout the majority of the weekend but was given a long lap penalty for Sunday’s 30-lap race after crashing under a yellow flag in FP4 on Saturday.

Starting from sixth on the grid, Miller took the long lap on lap five and charged from seventh to overcome Aleix Espargaro for the final spot on the rostrum, capitalising on the Aprilia rider running wide into turn one with three laps to go.

“It was probably one of the hardest races physically I’ve ever done,” Miller explained. “I did the long lap right away and almost crashed because of some rocks that were in the way. I got in behind [Jorge] Martin and [Fabio] Di Giannantonio and managed to pass their two Ducatis pretty easily.

“I struggled more with the two Aprilias, but then Viñales had a technical problem, and I took fourth place. I tried then on two occasions to pass Espargaro and got past him with three laps to go when he went wide. I pushed hard today and am very happy with this result.”

The German GP was a strong uplift in form for Miller after two challenging races at Mugello and Catalunya where he was P15 and P14 respectively, the number 43 finding a direction at Catalunya’s post-race test that helped with the improvement.

Following the announcement of his signing to Red Bull KTM Factory Racing for the 2023 and 2024 seasons, 10 races remain for Miller with Ducati as the round 11 of the 2022 MotoGP World Championship commences this Friday at Assen.