‘We kind of weren’t strong when it mattered’ – Staring 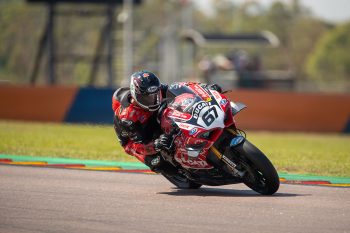 DesmoSport Ducati’s Bryan Staring demonstrated once again his ability to fight at the front with the V4 R, however, lost out during last-lap battles at round four of the 2022 Mi-Bike Australian Championship (ASBK) at Hidden Valley and finished third overall.

There was no shortage of effort, aggression or determination from the Western Australian, both himself and Troy Herfoss producing a thrilling spectacle during the closing stages of race one as they traded places multiple times in a battle for second.

A last-ditch effort from Staring in the final corner was ultimately unsuccessful, as he made slight contact with the Honda rider which forced him to run wide and finish third. Race two saw Staring regulated to third on the last lap by a hard-charging Mike Jones, before he finished fourth in the final outing, just under two-tenths from Herfoss in P3.

“It’s funny, I should be happy with that, but all I feel is dissatisfaction actually,” Staring said to CycleOnline. “I really wanted to get the championship back on track with some victories this weekend, and the only way to catch Jonesy [Mike Jones] is to be beating him consistently.

“Anyways, he was overall the pace setter of the races once again, so it’s going to take a little bit more to chase him.

“For me, the races panned out, I ended up being not the victor of the final lap battles, although we were quite strong in the races, we kind of weren’t strong when it mattered.

“Bit unsatisfied with that, but overall we can’t be too unhappy with third overall for the weekend, two podiums for the weekend and I imagine we have taken some points back on second.”

Staring is third in the 2022 ASBK standings, 47 points back from Jones and seven from Maxwell in P2, with round five of the series taking place at Morgan Park, QLD, on 5-7 August.