It was a third overall victory in a row for Yamaha Racing Team’s Mike Jones in the 2022 Mi-Bike Australian Superbike Championship (ASBK), winning two out of the three at Hidden Valley’s round four to further extend his championship lead. CycleOnline caught up with the 28-year-old after the races for this Debrief interview. 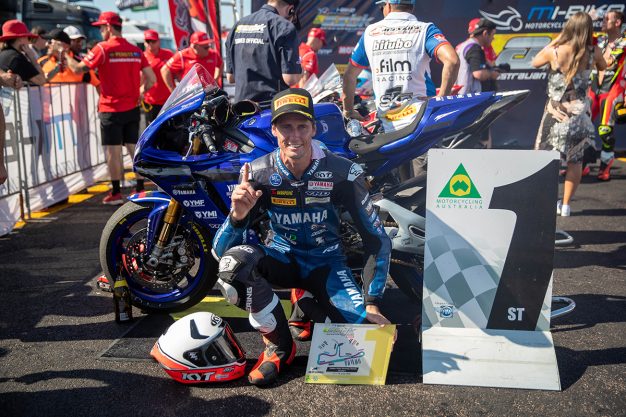 Congratulations on the overall. You’ve had some great results this year to be in the position that you are, but was the way that everything panned out in Darwin what you had expected?

Coming into the weekend, I with the nature of the circuit with such a long straight on it and the history from last year, it would be considered a bit more of a horsepower circuit. That is an area we were a bit more uncertain with, in comparison to our competitors. I was really confident that the bike would be fantastic in the rest of the circuit, which it was, and as it turns out the team did a really good job in extracting the most out of the bike, we were actually plenty fast enough on the straight and able to pass other bikes down the straight. That to me was a little bit unexpected, but in terms of the race results I think that I was expecting it to be more of a challenge and bit more difficult. It ended up being a little bit easier than I was thinking it would be, especially in race one and race three. Of course, race two was quite a difficult battle and a little bit of a challenge, so that was great, but ultimately we had really great pace around that track and not just one lap pace, but also race pace as well. It definitely wasn’t what I expected, but I’m glad that it panned out the way that it did.

Touching on race two, you made a lot of ground up on that last lap. Did you anticipate you would close down Wayne Maxwell as much as you did in that final lap? Can you talk us through that race from your perspective? You kind of dropped back a little bit there and you methodically made your way back through.

That last lap charge, the last couple of laps… that was me having a red hot crack. I was trying to win that race, and in the first part of the race I wasn’t able to get myself in a position to capitalise on our pace, it wasn’t until those last couple of laps that I got everything together. it was just that little bit too late. In saying that, even though we didn’t quite make it across to Wayne and come across with that win, it showed we had the pace and had the race been any longer, we were really strong. In terms of the way the race played out, I don’t think it was anything I did in particular that changed my result. Really, what it was was that the other riders were probably a little more aggressive. Arthur [Sissis] got a great start and got to the lead straight away, and Troy Herfoss was just in one of his attacking, aggressive, thinking about one turn sort of mindsets. That made it really difficult for me, instead of being able to have the momentum to carry from one turn to the next, he was making that really hard. A couple of times there I was out wide or having to come back from a slow speed. That pretty much for me was the main difficulty, and it took me a while to be able to break him and get away enough that he couldn’t keep doing that. Once that happened, that led to those last couple of laps where I was having a red hot crack to try and get back up to challenge Wayne for the win. That was sort of how the race went, and it was a tough challenge [laughs].

Funnily, one the superscreens around the circuit, coming into the last sector the way that it was positioned it was kind of in my line of sight, so I could catch a glimpse of it in the corner of my eye. I came around, I don’t remember which lap it was on but on the screen coming into the turn, they happened to have it on Wayne and he was picking his bike up. I saw that and thought wow, this is… I knew that I could win this race and I knew at that moment that this was going to be a great opportunity for me, for us to get some points. I did know about it, I did know that he had a crash, and it really solidified for me that I need to stay focussed and concentrate – hit all of my marks perfectly. It sort of almost gave me some sort of motivation, every time I saw my lap board the gap kept growing and that just drove me and honestly my last two laps I didn’t back off. I just felt so good on the motorbike I just kept trying to extract the most out of it I could, towards the end of the race I was having that fun riding around on my own, just genuinely having fun riding the bike to its limit.

With the next round being at Morgan Park, you’ve got the outright record there of a 12.6. Do you feel like the Yamaha platform will enable you to raise the bar further at that venue?

Obviously, going into the Morgan Park weekend, we are coming into there really strong for a few reasons. A big one is the more time I spend riding this bike, I think that I am just gelling with it that little bit more, and team, when they make the little adjustments to the motorbike they have got an even better idea – the more time that we spend together they get a better idea of what it is that I am looking for. It’s just me refining my riding on the bike, and the team refining the bike just that little bit further to suit my riding. I think we go into this next round in our strongest position. In terms of lap record and pace, we are going there with Pirelli, the tyre, it’s an evolving thing, we are constantly getting updates and improvements to the tyre, and basically, grip equals speed. The tyres are getting better and getting faster, so theoretically we should really be in a position to go faster than what we have in the past, the only thing that would change that is the condition of the track. The track probably degrades a bit over the years because they race cars and what not there, that could be the only thing that changes it. Theoretically, that would be a pretty cool achievement to be able to go faster there.