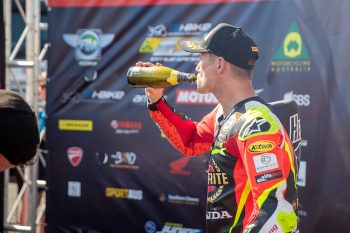 After a near career-ending crash at Hidden Valley a year ago, Troy Herfoss took an ’emotional’ step back onto the podium at Darwin as he continued to rebuild at the fourth round of the 2022 Mi-Bike Australian Superbike Championship (ASBK).

It was in race two last season in the Top End where Herfoss fell between turns two and three and sustained multiple compound fractures and breaks in the lower half of his body, having to overcome complications since in the recovery process.

The multi-time Australian champion has made notable progress towards the front of the field as each round has progressed this season, highlighted by second overall at Hidden Valley in what marked a near fairy-tale return to the venue with a 2-4-3 scorecard.

“It could have only gone a touch better, to win the race would have been unbelievable really, it felt like a win honestly,” Herfoss explained to CycleOnline.

“I’ve been working so hard to try and get back to normal, and it worked out that I was sort of in my stride in the last month or so, starting to feel really well.

“Every time I went through that corner I crashed in, especially the first session, I was quite slow in that area. I didn’t feel like I was worried about it, but I definitely started opening the throttle more as the weekend went on.

“It was a fun race in general, but because I had been away from the front for so long and those guys, that seemed like such a massive… at Phillip Island, they were three seconds faster than me, and to be up there battling with them mid-season at a track that almost ended my career was a bit overwhelming for me, I was pretty emotional.”

As Herfoss alluded, the next step in the rebuilding process is to win a race, with the upcoming opportunity for the number 17 to do so on the national stage being round five of ASBK at Morgan Park in August, a circuit where he currently holds the race lap record.

“Going into Morgan Park, the goal is to try and make that next step to where Mike [Jones] is,” he added. “Not just be as fast as all of those guys, but be as comfortable as Mike looks on that bike.

“It’s one of Mike’s best tracks the next one, it is a track that I love and that’s the next step I think, to try and bridge the gap to Mike.”