South Australian explains time at the front in Darwin. 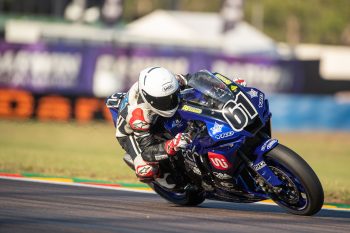 The fast-starting Yamaha rider launched from seventh on the third row of the grid to take the holeshot in the second bout at Hidden Valley, maintaining P1 for the first five laps.

“I felt good doing those times, and I think I ran wide a bit in turn one, Staring came past me, then [ Wayne] Maxwell blew past.

“I was in third, then [Troy] Herfoss put a move on me… we both ran wide and [Mike] Jones passed as well. I was still fifth, so not too bad, but I was concentrating too much on Jones instead of where I was going and I broke way too late into turn one and I ran off the track.

“That happened on lap 10 or 11 I think, I think the first 10 laps were pretty good, just that one little mistake stuffed my race. I think I could have hung with them until the end, but we will never know I guess.”

Sissis ultimately finished race two in seventh and was sixth overall in round four courtesy of a 7-7-5 scorecard. Round four was not the first time the R1 rider has shown the potential to fight for the podium in ASBK, with his best race result of the 2022 season, to date, coming at Queensland Raceway with a fourth in race two, two-tenths away from a top three.