Maxwell vows to work away at ‘frustrating’ mistakes 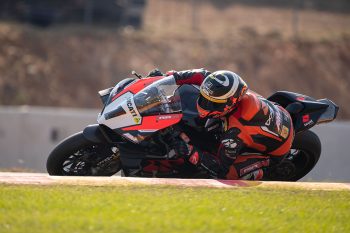 Maxwell was the standout when it came to outright pace in Darwin, storming to pole position as the first rider to break into the 1m04s bracket around the 2.87-kilometre circuit.

That said, the V4 R rider didn’t carry that advantage across when it came to the races. After finishing fourth in the opening bout, the number 47 rebounded to take a crucial victory in race two, clawing his way back from P8 after a poor start to claim his third win of the season.

While chasing championship leader Mike Jones (Yamaha Racing Team) in race three, Maxwell crashed on the seventh lap at turn six which brought an end to his charge, but was still able to remount and score 10 points from the outing courtesy of a P11 finish.

“We went through two years of having everything so perfect in every race pretty much and we are just having a few mistakes, not having the same sort of feel I’ve had in the past,” Maxwell told CycleOnline. “That part of it is a little bit frustrating, so we need to continue to work away on that, but the boys are pretty relentless and will keep working away and come up with a feeling that we are chasing.

“That last little bit, Mike is unbelievable and I can’t take anything away from him, he’s riding really well – probably the best he ever has. If we can just improve a little bit, we could try to keep the pressure on him to the end.”

It wasn’t the easiest weekend in Darwin for the Victorian on a variety of fronts, but he remains focused on coming out strong at the next round of the championship at Mogarn Park, on 5-7 August. He now trails Jones by 40 in the points standings.

“We can’t change what has happened in Darwin, sometimes you just have those years,” he added. “It’s just the way it’s going, I was unwell in Darwin and everyone at home has got covid. From a physical point of view it was a struggle and the bike wasn’t as good as we have maybe had it in the past, so to still do what we did is okay.

“We will just keep fighting away like we have in previous years and the boys in the team have, we’ll hopefully be able to come out at Morgan Park, obviously that is going to be another challenge as Mike is exceptional there, so are a bunch of over guys so we will go there and try to put our best foot forward, normally it’s good enough to be competitive.”