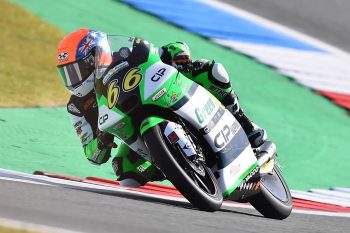 CIP Green Power’s Joel Kelso sustained a fractured right ankle and foot after he was taken out in a spectacular incident on the final lap of the 11th round of the 2022 Moto3 World Championship at Assen.

A great start at the Cathedral of Speed saw Kelso take off with the leading group before he eventually found himself in the second pack that was ultimately fighting for P6.

Entering turn eight for the final time in the race, Adrian Fernandez lost the front as he attempted to make a pass on Kelso. As a result, his bike impacted with the number 66 and high-sided the Australian considerably into the air.

A medical update from MotoGP read: “Moto3 rider number 66 Joel Kelso has a right ankle and foot fracture. He will go to hospital for a CT scan of the injured area. He has been declared unfit.”

The incident marks the second time this year that Kelso has been injured due to circumstances outside of his control, as he was struck by Ivan Ortola’s crashed machine in the warm-up at Jerez and had to withdraw from the race at the following French GP as a result.

While Kelso has experienced misfortune in his rookie Moto3 World Championship campaign, he’s shown multiple times the pace to run inside the top 10, with his best of result of the year thus far coming at Portimao where he finished ninth.

The series now enters its summer break with the next round to take place at Silverstone on 5-7 August, 2022.