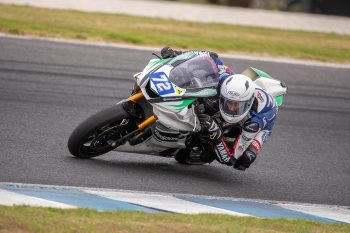 Supersport rookie Ben Baker is set to make a comeback at the fifth round of the 2022 Mi-Bike Australian Superbike Championship (ASBK) in Warwick, following his recovery from a broken wrist and shoulder sustained at Phillip Island’s opener.

The current R3 Cup and Supersport 300 champion graduated to a 600 this year and crashed heavily during FP2 at round one due to a mechanical failure.

Baker underwent surgery shortly after and missed the following rounds at Queensland Raceway and Wakefield. Now on the mend, he is completing laps ahead of his ASBK return at Morgan Park on 5-7 August.

“100 percent [racing Morgan Park ASBK], we are going to head up to the official test later in July on the R6 with everyone and see how we go there, just get as many laps in as possible,” Baker told CycleOnline.

“I had my first ride back a couple of weeks ago on an R3, at Picton go-kart track, the track we used to train at. I rode a couple of times there on the 300 to see how it would all go.

“Strength-wise… I haven’t actually done a lot of riding, I have ridden at Picton maybe three times, then I did a half-day at Eastern Creek on a 600, then Morgan Park for a two-day test on the 600, with one day rained out. For how much riding I have done I think I am doing okay.

“It’s going to take a bit of time, my wrist is still quite weak, I’m finding it hard to hold onto the bike so need to do a little bit more training and adapt from the 300 riding style to the 600.

“I’m still holding a bit too much lean angle and doing a few things that I need to change before I’m completely competitive, but it will only come with time.”