OJC confirmed as a support class for Phillip Island MotoGP 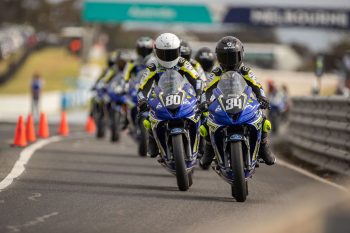 The bLU cRU Oceania Junior Cup (OJC) has been confirmed as a support class for the 2022 Animoca Brands Australian Motorcycle Grand Prix, providing some of Australia’s best up-and-coming road racers the chance to showcase their abilities in front of the MotoGP paddock.

Endorsed under the Road to MotoGP program, 2019 marked the OJC’s debut and has since provided a platform for domestic riders aged 11 to under 16 to hone their racecraft and launch into an international career, or progress through the Mi-Bike Australian Superbike Championship (ASBK) categories.

Carter Thompson was the series’ inaugural champion and is now competing in the European Talent Cup within the FIM JuniorGP World Championship, as 2020 and 2021 champions Marianos Nikolis and Cameron Swain have taken the next step on the ‘Road to MotoGP’ and are contesting the Idemitsu Asia Talent Cup (ATC).

2022 is the first time the OJC has been included as a support class at MotoGP, and in honour of Australian MotoGP legend and five-time world champion Mick Doohan, the overall winner across the three days at Phillip Island will receive the inaugural Mick Doohan trophy.

“Motorcycling Australia are happy to be working with AGPC [Australian Grand Prix Corporation] to showcase the OJC program in front of the world’s elite,” Motorcycling Australia CEO Peter Doyle said. “It’s a great opportunity for the 20 kids involved and they’re sure to put on a good show for those fans’ trackside at the Island.”

The OJC joins the national Superbike class to complete the support categories on offer at the Australian Motorcycle Grand Prix on 14-16 October. Harrison Watts currently leads the OJC following the first three rounds of the 2022 season.