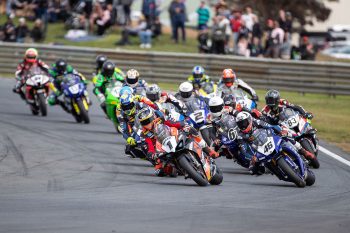 The future of Wakefield Park has been clouded in doubt following a court decision that imposes new noise limits, severely impacting the number of days the circuit can operate each year.

A hearing took place on 8-10 March, where the Benalla Auto Club (BAC) – owners of the circuit – took the Goulbourn Mulwaree Council to the New South Wales Land and Environment Court (LEC), with the new noise limit system addressed.

On 13 July the decision was made which ruled race meetings under the ‘Red Category’ of events – not to exceed 85-95 db(A) average over a period of 15 minutes. For each day a ‘Red Category’ event does take place, there is to be an 11-day respite period.

In the context of running a three-day Australian Superbike Championship (ASBK) event at the circuit, for example, the venue would be required to then take 33 respite days – defined as a day with no motorsport activity.

Such conditions seemingly make it unviable for marquee events to continue at Wakefield Park and the scheduled motorcycle ride day at the circuit for this Sunday, 17 July, has been cancelled.

After the ruling, BAC moved to confirm they are assessing all options to help preserve the facility in a press release titled ‘Wakefield Park in Peril.’ It read: “The viability of Wakefield Park as a motorsport facility is uncertain following a NSW Land and Environment Court (LEC) ruling handed down yesterday, 13 July 2022.

“Wakefield Park’s owners, the Benalla Auto Club (BAC), undertook LEC proceedings in relation to a new development consent for the facility that was issued by Goulburn Mulwaree Council on 13 July 2021. That consent was subject to numerous unworkable conditions. During the proceedings, Council proposed further and more stringent conditions.

“While Wakefield Park’s appeal was upheld by the LEC, the LEC largely adopted council’s proposed conditions. These severely restrict the number of days per year that the circuit can operate at various noise thresholds. Their effect will make it impossible to operate as a sustainable business.

“The LEC decision is a shattering blow to the BAC, which submitted the DA with an intention of upgrading and improving Wakefield Park’s facilities. Wakefield Park’s existence as one of only two permanent motorsport facilities in NSW is now in jeopardy.

“Nevertheless, the BAC recognises the importance of Wakefield Park, not only to the local economy, but to the wider motorsport and automotive industries. It remains committed to exploring all options with every level of government to preserve the facility.”

Wakefield Park has been the only track to feature in each of the last three ASBK seasons. While that is largely due to the timing of its events in relation to the pandemic, it has become a venue synonymous with domestic Superbikes in the modern era and provides immense levels of viewing and access to spectators. It is currently the only track in NSW to feature on the ASBK calendar.