Sixth rostrum of the season despite race one heartbreak in Portugal. 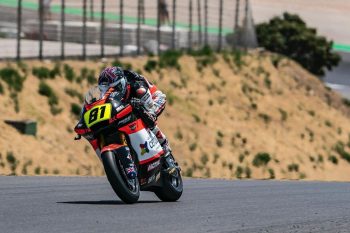 It was a mixed day for Promo Racing’s Senna Agius in the fifth round of the 2022 FIM JuniorGP World Championship at Portimao, heartbreakingly crashing out of the lead during the first Moto2 race before rebounding to finish P2 in the second bout.

Agius continued his impressive rookie season in the category by qualifying on the front row for Sunday’s two 17-lap races, and was notably quickest in QP2 on Saturday.

Starting from P3 on the grid, Agius made his way to the lead in the opening race and capitalised on a mistake by Lukas Tulovic to stretch out his advantage at the front. Tulovic worked his way back towards the front as the race progressed, and was closing in on Agius for what was set to be a thrilling conclusion before the Australian crashed out of the race at turn five, with five laps remaining.

An exciting race two saw the Australian miss his third victory of the season by just 0.055s in a three-way battle between himself, Tulovic and Alex Escrig. Following the runner-up result in race two, Agius is third in the championship standings, 54 points behind Tulovic.

“Tough pill to swallow today,” Agius shared. “Race one I crashed out of the lead because of a mistake I shouldn’t have made. Race two was a great race for us. I tried everything and made some nice moves to take the lead but I got slipstreamed to the line by (fraction emoji) much.

“I’m trying to manage every situation that’s thrown at me the best I can with no mistakes but today made me realise how much I want it after making some.”

Of other Australians competing at Portimao, Harrison Voight (SIC58 Squadra Corse) qualified third and was in the podium fight right up until the last lap where he was taken out in the first corner. Also in JuniorGP, Aspar Junior Team rider Jacob Roulstone crossed the line in P17, just two-tenths away from a points-scoring finish.