Challenging Czech round for Bayliss with eyes forward to France

Strong pace in race one second-half a positive for WorldSSP rookie. 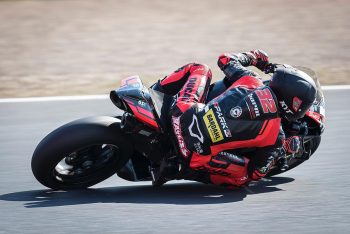 Barni Spark Racing Team’s Oli Bayliss has immediately set his focus toward a stronger showing at Magny-Cours following a challenging round six of the World Supersport Championship (WorldSSP) in the Czech Republic.

The Australian teenager qualified 23rd at Most, 1.6s from pole, and quickly moved up to P13 in race one.

After being shuffled to 16th in the following laps, Bayliss showed great pace in the second half of the bout and clawed his way back to 13th. In Sunday’s race, he fell on lap six which brought a premature end to his outing.

“It was a very strange race, it’s a tough one to explain,” said Bayliss. “At first, we were doing pretty badly but then much better by the end. I continue to struggle too much in the first half, and in qualifying, and this means I lose too much ground.

“Then in the second half, I had similar speed to those fighting for the top five. But by that point, it was too late. If we can improve in the first half of the race, we can do really well.”

“I made a good start and immediately began to push [in race two], trying to catch up. Then unfortunately I entered one turn a little fast and at too much of an angle, which meant I lost the front and crashed. I’m disappointed but luckily I’m OK and can immediately start focusing on the next round.”

Bayliss is 17th in the 2022 World Supersport standings with his best result of the season to date coming during race two at Estoril in P6. The next round of the series takes place at Magny-Cours, France, on 9-11 September.