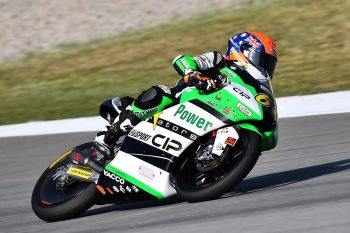 Moto3 charger Joel Kelso is targeting a return to the world championship at the Red Bull Ring as he continues to recover from a right ankle and foot fracture sustained in a heavy fall at Assen.

The Australian teenager was taken out entering turn eight on the final lap of the race at The Cathedral of Speed, launching him considerably into the air before a crushing impact.

“Sadly, I’m not going to be racing at Silverstone,” Kelso shared. “While I’m happy and very relieved that my recovery is going to plan, It’s unfortunately still too early to get back on the bike. I’m sorry to my team CIP Green Power, I’m counting down the day till I’m back racing with you guys in Austria!”

It’s been just over five weeks since the incident, with this weekend’s round 12 of the 2022 Moto3 World Championship at Silverstone the first round the number 66 will miss as a result of the latest injury, courtesy of the series’ summer break.

Round 13 takes place at Spielberg, Austria on 19-21 August, proving Kelso a further two and a half weeks to recover before his return to competition.