Triumph’s Mitchell Carr will look to extend his lead in Australian Supersport on Sunday. 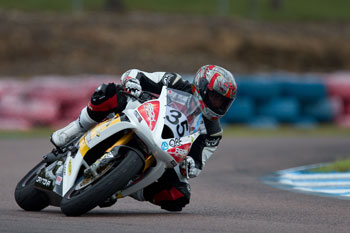 Triumph’s Mitchell Carr will look to extend his 11.5-point lead in the tightly-contested Motul Australian Supersport Championship this weekend.

A pair of proven local wildcards could spoil the party of the frontrunners on race day, with Mike Jones and Brendan Clarke both immensely experienced at the 3.12km circuit.

18-year-old Jones has made the step from the Superstock-spec bike to Supersport with top results, and, complete with his vocal fan club, could be in contention for race wins this weekend.

Clarke put on a top show in a one-off appearance last year, finishing a close second in both races to eventual champion Kevin Curtain.

Both the Superbike and Supersport classes will contest a pair of 17-lap races on Sunday following initial qualifying and four-rider Superpole sessions on Saturday.

On-track action will include a series of shows from stunt sensation Lukey Luke on his custom-built Triumph motorcycle.