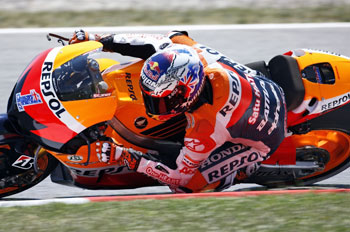 Stoner was a close second to pace-setter Dani Pedrosa in this morning’s final free practice session, then found some more speed for qualifying.

The reigning world champion spent much of the hour experimenting with the two rear tyre choices and despite having to contend with some chatter issues he was able to better title rival Jorge Lorenzo by 0.146 with a 1:41.295.

“We used the qualifying as an extended practice session as we don’t always have enough time to do everything during the 45-minute sessions,” Stoner said.

“This morning we did a lot of work with the hard tyre, so in the afternoon in these hot conditions we worked more with the softer one to get a clearer understanding if we can run with it for race distance.

“We were in and out a lot during the session trying a few different things, hoping to reduce the chatter which is still proving to be a problem. As soon as I touch the throttle the bike starts to chatter in the rear and it’s making things very difficult.

“Towards the end of the session we managed to improve it slightly, but I think we need to make another step before the race. Tomorrow, for sure tyre degradation is going to play a role so we’re going to have to wait and see, but I’m happy to start from pole.”

Completing the front row alongside Stoner and Lorenzo will be Monster Yamaha Tech 3’s Cal Crutchlow, who equalled his best ever start.