Team Suzuki Supersport star shines in dramatic round of support racing at the 'Paperclip'. 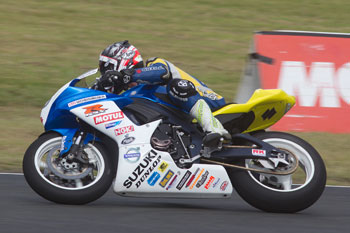 A series of crashes cut short a dramatic day of racing in the Motul Australian Supersport Championship at Queensland Raceway today, with Brodie Waters emerging the victor despite crashing out of the second race.

Team Suzuki’s Waters battled back from seventh on the grid to claim third ahead of Team Honda Racing’s Josh Hook and local favourite Brendan Clarke.

The second race was red-flagged after a turn one crash involving Yamaha rider Mike Jones, with the field resetting to their original grid positions for a full re-start.

Scott took the lead and began to stretch his legs again, unaware of a championship-changing crash behind him involving series leader Mitchell Carr.

Carr came unstuck at the tricky turn five and was forced to wait out the rest of the race on the in-field.

The damage to his title charge was minimised when Waters and Scott crashed heavily into the turn one sand trap, resulting in a red-flag and the early declaration of the race.

Hook was awarded the win and half points, but a post-race protest saw Waters re-instated as race winner.

Carr leaves Queensland Raceway with a lead of just 4.5 points over Hook, with Waters still in check just eight points further behind.