IEG continues bid to boost Australian Superbike series ahead of next season. 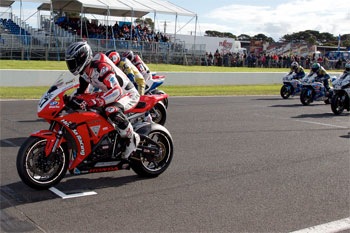 Konsky has confirmed that IEG is already focused on next year’s series in a bid to strengthen its popularity, both from a competitor and spectator point of view. Meetings at the recent Phillip Island and Queensland Raceway rounds have progressed next year’s plans.

The Superbike and Prostock categories are in line to be combined for 2013 to make a single premier class, with early indications pointing toward a scaled-back version of the current Superbikes.

Superport and Superstock 600 will also feature the same specification motorcycle for the first time ever if approved by Motorcycling Australia’s Road Race Commission, but A- and B-grade entrants will remain separate to the C- and D-graders.

Konsky also hinted that the rumours regarding next year’s tyre regulations are true, but stopped short of confirming that the ASBK will welcome multiple tyre makes back in the new year.

“We’re really focusing strongly on next year’s championship and there’s a lot of development regarding class structure change and also some developments in regards to tyres,” Konsky confirmed to CycleOnline. “Hopefully that will all help and aide in participation, plus we are also changing some avenues in the back-end in which we’ll run and promote the championship.”

IEG’s open meetings with all ASBK competitors further outlines the company’s interest in working with those who contest the series, but the real test will come later this year when the final structure is confirmed.

Konsky said that while outright performance is a nice feature, close racing is key and IEG is focused on catering to its range of companies and individuals with vested interests in the series.

“ There comes a time in which you need to accept that a dictatorship isn’t going to work in motorcycle racing,” Konsky continued. “We have three clients, being the industry, riders and spectators.

“Now, the spectators want to see good racing, and they want to see a 600 class and a 1000 class. Lap records are always great to smash week in, week out, and provide some form of news. However, that’s not what people are here for.

“If Formula One slowed down five seconds a lap or V8s, MotoGP or WSBK, the crowd would still come as long as there is parity and great racing. We want to maintain the intensity of the battle, but try and alginate the 1000 and 600 classes.

“The discussions have been quite positive. We’ve spoken to the 1000cc riders at Phillip Island, Prostock and Superbike, then this weekend we spoke to Superstock and Supersport.

“The end result is quite clear and riders are definitely happy to race in one class each, respectively. It’s just a matter of forming the rules to make the biggest difference.”

It’s yet to be confirmed what the exact specification of motorcycle will be implemented in 2013.

To have your say, check out the CycleOnline.com.au Cycle Poll in our right-hand sidebar and click on the regulation that you’d like to see next season.