Experienced Victorian speaks out about his Australian Superbike race one win at the 'Paperclip'. 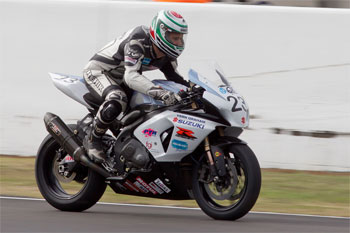 Racers Edge Performance Suzuki’s Scott Charlton has reflected on his genius decision to pit for his spare bike with a dry setting on it ahead of race one at Queensland Raceway on Sunday.

Charlton and the privateer team broke through for their first Australian Superbike race win together in a dream performance, slicing his way through from the rear of the pack after starting from pit lane.

A sixth place finish in race two sealed second overall for Charlton, but it was his first race win that stole the show.

“On the sighting lap it looked like there was a drying line,” Charlton reflected. “I had originally wanted to run the number one bike with a wet set‐up after the rain shower but we simply didn’t have time to swap it over.

“After the warm‐up lap I pulled in to grab the number one bike with the slicks on that the team had ready in pit lane, knowing I would have to start be behind everyone. I was a bit worried on the first lap because I could see them all strung out with Ben [Attard] and Josh [Waters] getting away at the front.

“I wasn’t that fast at the start just playing it safe and getting heat into the tyres as the track was still pretty wet off the racing line. After a few laps I could see everyone struggling with the wet tyres and I just thought you beauty and started going forward.

“In the end it was just like a ride day as I knew no one could match my pace and I just rode to the flag with no pressure at all. In all honesty on the last lap I was planning where I could do a stand up wheelie to celebrate, I still can’t believe it and big thanks must go to the team.”