The Isle of Man TT concluded over the weekend with the first ever cancellation of the Senior TT. 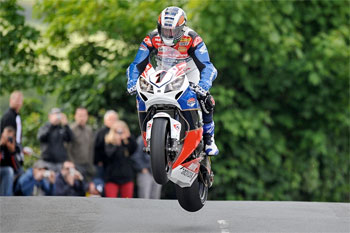 John McGuinness on his way to victory in the Superbike TT last week.

The Isle of Man TT concluded over the weekend with the first ever cancellation of the Senior TT.

After a number of delays and a decision to cut the race from six laps to four lap, it was announced by rider liaison officer John Barton that the Senior TT was off for the first time while the event has been run.

Conor Cummins, John McGuinness and Ian Lougher were among the riders on the course inspection.

On the final day it was Ryan Farquhar who took his third TT win on Saturday evening when he took the re-introduced Lightweight TT on the KMR Kawasaki.

Australia’s Cameron Donald claimed fourth in the race, marking another strong finish in a week that saw him capture three podiums across three categories for Wilson Craig Honda.